Toshiba isn’t done with Android on tablets, as the company is following up the Thrive Android Honeycomb tablet with the Thrive 7. As you would imagine by the name, this device will rock a 7-inch display and it will come preloaded with Android 3.2 Honeycomb.

The Toshiba Thrive 7 aims to keep many of the functionality and power of its older brother while sporting a smaller form factor. We liked the fact that the Thrive had full USB and HDMI ports but these did add the bulk of the device when competitors like the iPad 2 and Galaxy Tab 10.1 coming in with very thin frames.

The Toshiba Thrive 7 tablet rocks a miniHDMI port, microSD card and a miniUSB port and it also sports a thin frame while weighing less than a pound. Like its older brother, it features a grooved backing that makes it nice to hold in the hand and it even sports the same resolution (1280 x 800) as the larger model.

Inside you’ll find an NVIDIA Tegra 2 dual-core processor which should give it more than enough horsepower for surfing the web, watching movies or playing 3D games. The device will come in 16 GB and 32 GB models and it will also have GPS and Bluetooth. Look for the Thrive 7 to land around December and the pricing has yet to be determined.

We had a chance to handle an early version and even though the software isn’t quite where it will be at launch, the device feels really nice in your hand and the screen is quite sharp and vibrant. I’ll still have to wait and see how much this will cost but it looks like a nice, portable Android tablet will be coming from Toshiba in time for the holidays. There will also be a docking station, multiple covers and a Bluetooth keyboard. 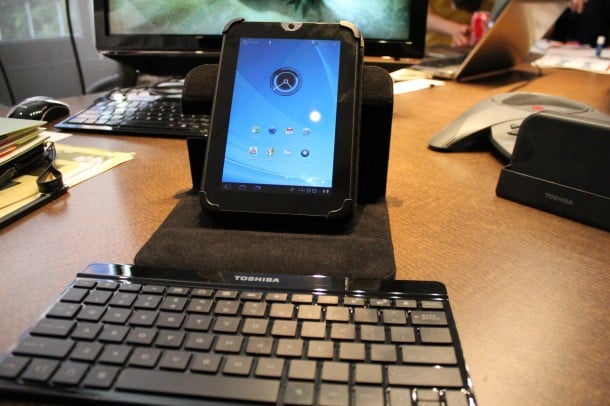 Amazon tablet could come tomorrow – We’ll be there live

Amazone is holding a major press event tomorrow morning and all signs point to it finally unveiling the much-rumored Amazon...