In a sad note, Apple’s board of directors said that former CEO Steve Jobs has died. He was 56.

In a statement, it said:

We are deeply saddened to announce that Steve Jobs passed away today. Steve’s brilliance, passion and energy were the source of countless innovations that enrich and improve all of our lives. The world is immeasurably better because of Steve. His greatest love was for his wife, Laurene, and his family. Our hearts go out to them and to all who were touched by his extraordinary gifts.

The Jobs family released this statement:

In his public life, Steve was known as a visionary; in his private life, he cherished his family. We are thankful to the many people who have shared their wishes and prayers during the last year of Steve’s illness; a website will be provided for those who wish to offer tributes and memories.

We are grateful for the support and kindness of those who share our feelings for Steve. We know many of you will mourn with us, and we ask that you respect our privacy during our time of grief.

Obviously, Jobs has had a major impact on the technology sector for the last 30 years or so. He and Apple pioneered personal computing, the graphical user interface, it reinvented how we buy and consumer music with the iPod, the iPhone kicked off the smartphone revolution and the iPad finally created a market for tablet computers after many tried for decades. Jobs had been battling health problems for the last few years, including pancreatic cancer.

Jobs was the co-founder of Apple and was long seen as a visionary. Apple grew from a two-man shop to the world’s most valuable company but it wasn’t always a smooth ride. Jobs was actually kicked out of Apple for nearly a decade and many say that time in the “wilderness” made him a stronger CEO. When he wasn’t at Apple, Jobs was a strong part of Pixar and he founded NeXT, which was later acquired by Apple and became the basis for its modern Mac OS software.

Back as the CEO of Apple, Jobs introduced the iMac and the iPod, which set Apple on its path to industry dominance. With an eye-catching design and slick software, the iMac became very popular. The iPod entered a digital music player market that was filled with competitors and made Apple the undisputed king of this space thanks to its design and the iTunes software and store.

In 2007, Jobs introduced the iPhone after years of rumors. While Research In Motion, Motorola, Nokia and others had been producing smartphones for years, the combination of the sleek design, strong multitouch and Apple’s flair raised the bar for what people expect from a modern smartphone. It’s not tough to argue that the iPhone, its software and its sequels have made smartphones better across the board, as competitors had to step up their games in order to compete.

The iPhone actually came out of research for what eventually became the iPad, which was introduced in 2010. Companies like Microsoft had been pushing tablet computing for years but the technology, marketing and software were never there. Many people – including your author – didn’t understand the appeal of the iPad when it was first introduced but once you got it in your hands, it was clear that tablet computing could and would be big. The iPad is the dominant tablet and every other hardware maker is trying to get into this space.

Honestly, without Steve Jobs and Apple, this site might not exist in its current form and we want to say Thank You, Steve Jobs. When he resigned as CEO a few months ago, the IntoMobile team gave our thoughts – you can read it here. Apple is now run by Tim Cook, who showed off the iPhone 4S yesterday.

If you visit Apple.com, you’ll be greeted with this image: 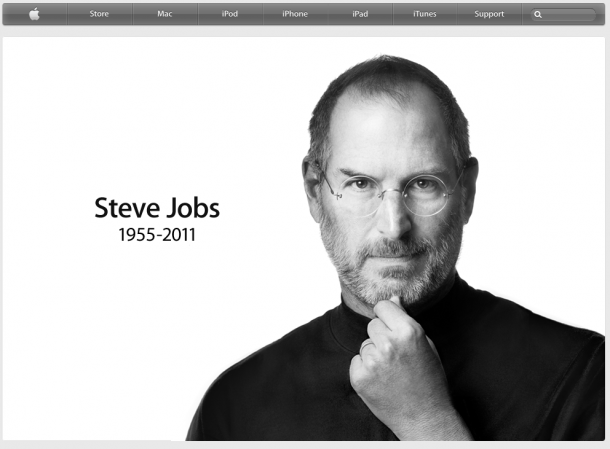 RIP Steve Jobs. You left the world a better place. We send our deepest condolences to the Jobs family.

If you would like to send your condolences or memories, Apple has set up this email: rememberingsteve@apple.com

If you're disappointed with the iPhone 4S, the Apple Cards app isn't going to make you feel better. Still, this...