The latest study conducted by Nielsen shows that 40 percent of people use their tablets and smartphones while watching TV. This survey illustrates how users are increasingly multitasking when it comes to multimedia, and justifies a lot of the work DirecTV is doing with smartphone and tablet linking to their set-top boxes. All of this information was obtained in the the second quarter of 2011.

One glaring result that was captured by the Nielsen folks was the vast difference between tablet / smartphone owners compared to e-reader owners. The survey not only showed that 40 percent of tablet and smartphone owners in the U.S. used their devices daily while watching TV, but it showed that only 14 percent of e-reader owners said they watched TV while using their device every day. When it comes to 40 percent of folks, most of the multitasking included checking email, social networking, and sports scores.

Honestly, this survey did a great job of highlighting the differences between two separate groups of users, those who love multitasking (focusing on more then one thing) and those who are driven to complete one task at a time. It would have been cool if the survey went a bit further, like incorporating the average age of these two groups of users or something psychological — like the percentage of people who have an Attention Deficit Disorder (ADD) — I don’t know, more specifics would have helped.

Checkout the Nielsen chart below: 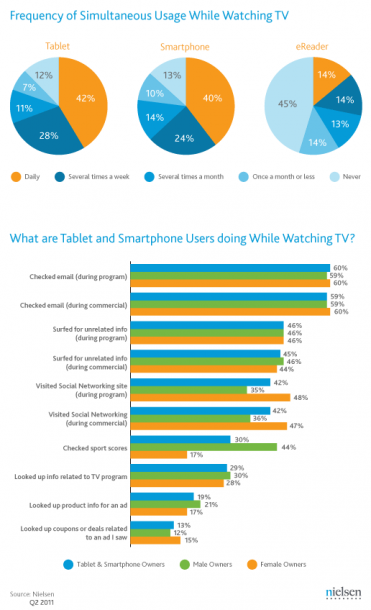