Samsung’s Galaxy S and Galaxy S II have sold more than 30 million units since first launching at the 2010 Mobile World Congress. To put that into some perspective, that’s happened over a span of 20 months, so that’s an average of 1.5 million units sold every month. The original Samsung Galaxy S was incredibly controversial since it was one of the first devices on the market with a 4 inch screen. Back then that seen as absolutely gigantic. Still, it was a hell of screen to look at. Thanks to the Super AMOLED technology that Samsung used, the colors popped, the blacks were ultra black, and battery life was simply amazing. Just one year later the successor to the Galaxy S was announced, aptly called the Samsung Galaxy S II. It sported an even larger 4.3 inch screen that used Super AMOLED Plus technology, which increases the number of subpixels per pixel from 8 to 12, making images appear sharper and with better color accuracy. They also added a second core to the thing, making it blindingly fast. 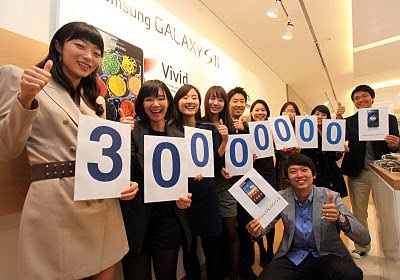 Following that pattern of announcing one device every year, can we expect to see a Samsung Galaxy S III announced in four months at the 2012 Mobile World Congress? We’ve already seen rumors that suggest the Galaxy S III will feature a 1.8 GHz dual core processor, 2 GB of RAM, 12 megapixel camera, and a 4.6 inch 720 p Super AMOLES Plus HD display. Compared to the Galaxy S II, that’s 600 MHz extra per core, twice the RAM, 4 more megapixels, and 0.3 inches more screen. Said device will probably use the new Samsung built Exynos 4212 processor that was announced late last month. It’s built using a new 32 nanometer process, has a graphics chip that’s 50% faster than the one in the Galaxy S II, and … that’s about it.

Let’s pace ourselves though, first let’s see Ice Cream Sandwich, the next version of Google Android, and then we’ll worry about devices.

Samsung now trying to get the iPhone 4S banned in Australia, France, Japan, and Italy

Apple's newest hotness, the iPhone 4S (check out our review!), has become Samsung's latest target in the never ending spat...