Steve Jobs passed away on October 5th, 2011. Less than 10 days later, Matt Bors made the comic you see below that had me laughing out loud, but I thought it was too soon to share it with you guys. Now that it’s been nearly 3 weeks, and his authorized biography is out, I think it’s appropriate to slap this piece of artwork up on IntoMobile. Back to the biography for a second, how many of you picked it up yesterday? I was delighted to see it on display at the book store right across the street from my local supermarket on the same day that it was released in America. While I could have picked up the digital version and read it on my iPhone or my laptop, something compelled me to purchase the heavy hardcover. Despite work and the joys of life eating up most of my free time, I’ve already managed to get through a little more than a quarter of it, and this weekend my girlfriend is going on a family retreat so my goal is to have it done by the time she comes back. While I’m not going to review the book this early into it, let’s just say that if you’re a Steve Jobs fan you may not like him so much anymore. If you’re a Steve Jobs hater, which I admit to being, though I respect the man incredibly for his accomplishments, then you’ll want to firebomb an Apple Store. 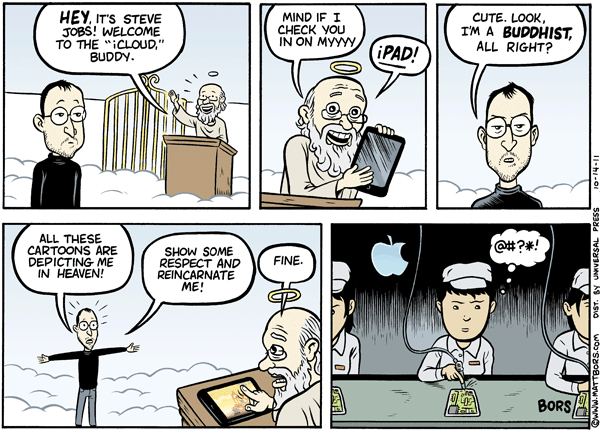 As for the topic being satirized, the Chinese labor that Apple uses to make all the “magical” products that make them the richest company on the face of this planet, it’s one that’s very dear to me. I admit that I don’t recycle, I waste energy, and I take showers that are far too long, but I try hard, incredibly hard, to not be material. Every time I see a stupid gadget on a store shelf I roll my eyes and think about the person who had to wake up after 4 hours of sleep in a dorm room that 12 people occupy just to build that piece of shit.

Maybe it’s a good thing the iPhone 4S let me down. Another 12 months with my iPhone 4 isn’t such a bad thing.

Video: Apple’s first iPhone 4S ad is all about Siri, Siri, and Siri

Apple's iPhone 4S, which broke the 12 month product cycle previous iPhone models have maintained and also let down many...