ARM, the company most folks recognize for their CPU cores that can be found in a majority of the system-on-chip platforms on the market, also makes graphics cores; better known as the GPU. Their current (as in shipping) flagship GPU, the Mali-400, is inside the Samsung Galaxy S II and is widely recognized for delivering best in class in performance when it comes to Android smartphones. The only thing faster is the PowerVR SGX543MP2 inside Apple’s latest A5 chip, found inside the iPhone 4S. Now last year, to the exact day, ARM introduced a new GPU called the Mali-T604 that the company claimed to be 5x faster than the previously mentioned Mali-400. We expect to see the T-604 show up in smartphones coming out during the second half of 2012. Seeing as how in this business you can’t afford to stay idle and wait for your competitors to catch up, today ARM is introducing the Mali-T658. It’s a whopping 10x faster than the Mali-400, and unlike the Mali-T604, which only scales up to 4 cores, the T-658 can scale up to 8 cores. So instead of the T-658 being only 2x as fast as the T604, it can theoretically be configured to deliver 4x the performance. And again, the Mali-T604 has yet to even ship. Expect to see the successor, the T-658, show up at some point in 2013. 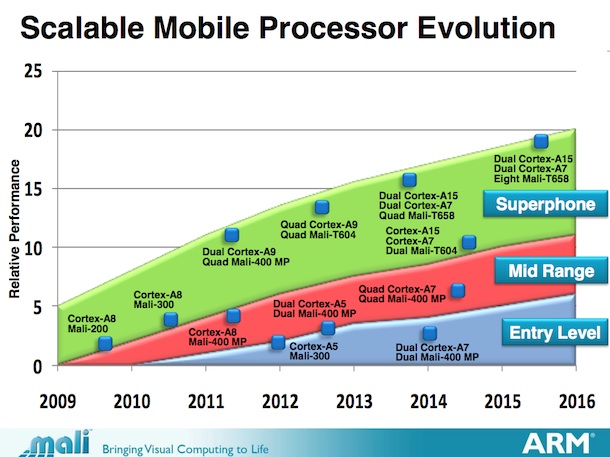 Looking at the chart above, it’s pretty incredible that at some point in the next 3 years a smartphone with the processing power of the Samsung Galaxy S II will be considered midrange, possibly even entry level. Besides developers using all this new found power to make their games ever more realistic, we hope that Apple, Microsoft, Google, and who knows who else will be making operating systems in 2015, will use that GPU power to deliver interfaces that redefine the interaction models we’re used to today.

That’s asking a bit much, but you can never please a geek.

Note: Qualcomm bucks the trend here. They don’t license ARM CPU cores or GPU cores, they design both in house. They also bundle their CPU/GPU with connectivity, which is why they’re a huge player in the mobile industry. NVIDIA uses ARM CPUs, but they make their own GPU, and they’re looking to bundle connectivity at some point in the future. Samsung is actually the most conservative. Their chips use both ARM CPUs and GPUs.