Apple today has officially released its latest iTunes offering (version 10.5.1), which brings in a new $24.99-per-year iTunes Match service. With iTunes Match, users can subscribe and receive the ability to re-download songs on other devices like an iPhone or iPad. This is something Amazon’s Cloud Player has been doing for awhile now.

iTunes Match is built right into the iTunes software and the Music application on iOS devices, so easy access isn’t a problem. Users can store their entire collection, including music that was imported from CDs or purchased somewhere other than iTunes, so long as your tracks can be properly paired up with what’s available in the iTunes catalog. I happen to buy a lot of music on iTunes, but I noticed how poorly iTunes synced music from outside sources; maybe that’s by design to make me purchase from the iTunes store.

That said, iTunes Match is probably an awesome service, but Amazon has been doing this for a year now. Amazon users have been able to upload unlimited amounts of media related content, whether it’s purchased or not. As a customer, I’ve been re-downloading songs on all devices for a while now. The iTunes Match is a subtle change, but a much-needed one for those steeped in the Apple ecosystem.

Additionally, iTunes Match is kind of a get out of privacy free service, as it will scan your existing collection – no matter where you got it – and offer you an iTunes version that is DRM-free and, likely, higher quality. That might be worth it right there.

The new version of iTunes is now available for download on both Mac OS X and Microsoft Windows.

Update:: Looks like the servers may be a bit full, as we’ve seen multiple failures on iTunes Match. I expect it to be taking up a ton of bandwidth both ways, so just give it some time and I’mm sure it will work. 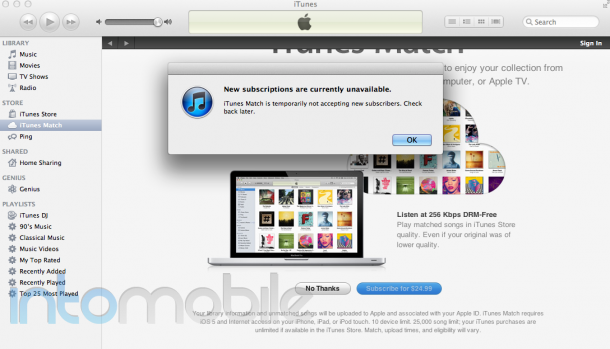 MobiHand owes $160k to one developer, considers going up for sale

MobiHand, a prominent third-party app store, looks like it's on the financial ropes. One developer is claiming that it is...