Qualcomm’s just announced 8 new processors that use their brand new Krait core. More importantly, they said that devices “based on Snapdragon S4 processors are expected to appear in early 2012.” So what exactly is Krait and what on earth is an S4? Krait is the name of Qualcomm’s new application processor. Have you heard about the ARM Cortex A8 or the Cortex A9? Those are application processors; think of them like the CPU inside your laptop. Qualcomm doesn’t license processors from ARM like Apple, Samsung, NVIDIA, ST-Ericsson, or Texas Instruments do, instead they make their own. Their Scorpion core is what’s currently running in just about every single Qualcomm based smartphone on the market. Now as for S4, that describes a complete system on chip (CPU + GPU + input/output) that’s powered by a Krait core. In other words, any S4 Qualcomm processor you see inside a smartphone has a Krait core. We don’t yet know how fast Krait is compared to the competition, but on paper it’s supposed to be close to ARM’s next generation Cortex A15 processor. 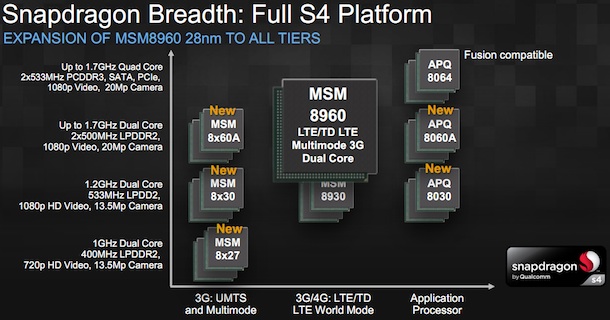 On to the actual chips themselves, there are going to be several flavors of them. The most important differentiator is going to be connectivity. Everything that’s in the MSM8x class has plain jane 3G support. The MSM8930 and MSM8960 have 4G LTE support baked in, the difference being the latter will be shipping earlier because it’s using the “older” Adreno 225 GPU. The MSM8930 will use Qualcomm’s next generation Adreno 305 GPU, but with the catch that the MSM8930 has a single channel memory controller whereas the MSM8960 uses dual channel memory. And finally there’s the APQ80x series, these don’t have any connectivity whatsoever.

In terms of clock speeds, the MSM8960 will start shipping at 1.5 GHz, though there are plans to introduce 1.7 GHz parts. The same is the case for the quad core versions of the S4. As we said earlier, since these chips use a totally new core, we have no idea how much faster on a clock per clock basis they really are.

If you want more of this deep dive into the technology behind Qualcomm’s newest chips, make sure you head on over to Anandtech and also check out Qualcomm’s investor relations site. Stream the presentation that occurred on November 16th.

Just six months ago in May, Google announced during its I/O conference that it had activated 100 million Android devices....