A man by the name of Silly22 on the XDA Developers forum recently posted images of a badly damaged Samsung Galaxy S II along with a mildly terrifying story of why it looks the way it does. The story goes something like this: a friend of Silly22 had the smartphone pictured below in his pocket when all of a sudden he felt a burning sensation on his leg. When he pulled the device out of his pocket smoke started coming out. The victim (how often do we get to use that word?!) says that his device is barely 2 weeks old and that he wasn’t even using it that heavily. Now we found out about this tale of near sterilization from The Boy Genius Report, who says that the device in question is an AT&T Samsung Galaxy S II Rocket. They’re confident in saying that because that’s what Silly22 said in his forum post. If that’s the case, then why is there a Rogers SIM card (Canadian wireless operator) inside this thing? 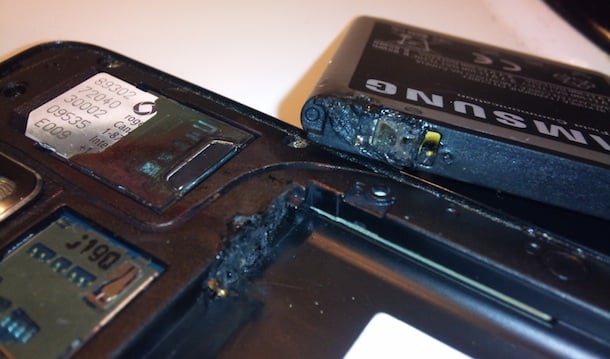 This isn’t an isolated incident. Last week an iPhone 4 exploded while on a domestic Australian flight. We’re just now starting to get reports about a second iPhone 4, this time in Brazil, that’s also exploded. Three devices out of the millions that ship every month is hardly a cause for concern. These stories are great for headlines, which sell papers, or in our case page views, but we honestly hope that both Samsung and Apple are taking these incidents extremely seriously and have dispatched teams to conduct a thorough investigation as to what caused these “explosions” and how to prevent future accidents from occurring.

The best advice we can give you is to simply not worry. Again, the odds of this happening to you are minuscule. If your device does get hot, then turn it off and keep it as far away from your genitals as possible.