No one doubted the Nokia Lumia 800 would be one of the most popular Windows Phone handsets on the market and recent sales numbers in the Netherlands and France are proving that theory to be correct.

KPN, the largest mobile carrier in the Netherlands, is now boasting that the Nokia Lumia 800 is its best selling phone as of yesterday. Considering the extensive iPhone 4S sales that have been continuously reported since its launch, you can imagine just how well the Lumia 800 is doing.

To meet high demand, Nokia is expected to increase supply orders by as much as 20 percent in 2012. DigiTimes reports:

“Keypad and metal chassis maker Silitech saw its consolidated revenues grow 3.1% on month and 6.8% on year to NT$1.34 billion (US$44.33 million) in November, thanks to orders for aluminum-magnesium alloy chassis from Nokia, the sources indicated.”

Nokia and supply makers aren’t the only ones benefiting from the Lumia 800. Microsoft’s Windows Phone operating system has had a relatively small user base thanks to a combination of things, such as sub-par hardware. The Lumia comes along and is said to be increasing the Windows Phone install base and overall awareness. Mango added a high level of polish to the OS, so Microsoft definitely deserves the attention. 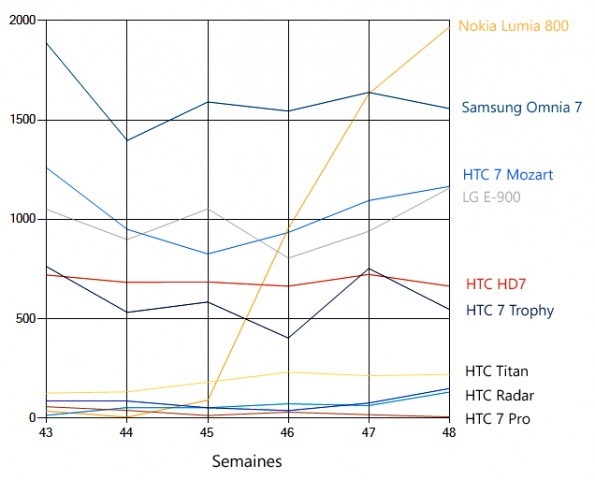 In five weeks, the Nokia Lumia 800 became the top selling Windows Phone device. It’s not even on shelves in the United States yet, though T-Mobile and Nokia just today announced a special event for December 14th, so that might be changing soon.

[via DigiTimes and WMPowerUser]