It’s an exciting time in the mobile world, as all four major carriers have a 4G network deployed but we all know that not all 4G is created equal. When you think of “4G,” you should be thinking about LTE because this mobile data technology delivers speeds which really can change the way we work and play.

Verizon is the big fish in the 4G LTE pond, as it aggressively rolled out its network in 2011 and it now covers more than 200 million people and routinely tops nationwide speedtests. Personally, I use a Verizon 4G LTE USB modem whenever I’m going to a conference because it has been reliable, consistent, fast and has been nearly everywhere I want it.

AT&T has been slowly rolling out its 4G LTE network and it’s still only in a handful of markets. While the test network is live (and incredibly fast) in my hometown of San Francisco, it’s not really fair to compare that performance with Verizon’s because it’s not completely up and running. I’ve spent the last few days in Houston and San Antonio though and both cities have robust 4G LTE networks from Verizon and AT&T, so you just know I had to pit the two against each other. 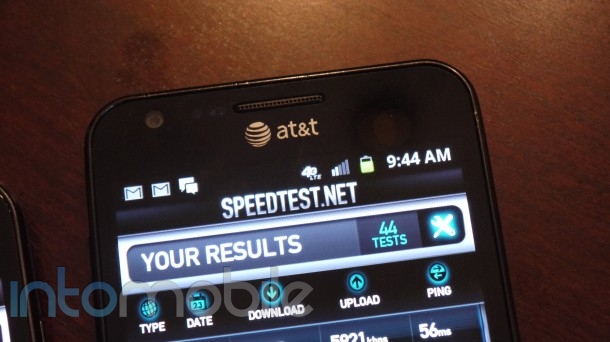 I came to Texas loaded for bear with 4G LTE smartphones, as I brought the AT&T Skyrocket and LG Nitro, as well as the Samsung Galaxy Nexus and Motorola Droid Razr for Verizon. All of these devices are ultra-premium phones and should have top-of-the-line performance when it comes to mobile data. The key word there is “should.”

I was stoked about testing out AT&T’s 4G LTE network because it’s kind of a treat for me. The Skyrocket performed like a champ (more on that below) but I was confused to see the LG Nitro HD didn’t even pick up a 4G LTE signal. I saw this in San Francisco with the test network but thought that was a network issue. I’m now in AT&T 4G LTE country and still can’t get the LG Nitro HD to pick up a 4G LTE signal, even when I switch the SIM card with the Skyrocket. This is very frustrating and forced me to just use the Skyrocket for my tests.

I’ve been reviewing the Verizon Galaxy Nexus for the last few days and liked the mobile data I was pulling down until I put it next to the Motorola Droid Razr. In the same location, the Droid Razr would routinely get more bars of coverage than the Ice Cream Sandwich phone, so I guess I am experiencing some of those signal woes we’ve heard about. Luckily, the speed results don’t seem to be too far off. 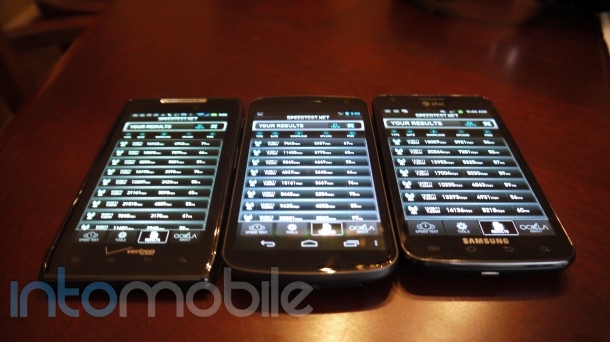 So, this test found that the AT&T 4G LTE network outperformed Verizon’s in San Antonio and Houston but we’re not prepared to declare a clear-cut winner. First of all, AT&T’s network is much younger and has fewer users on it than Verizon’s, which means it’s not as crowded and speedier for now. Still, this is a good sign for AT&T and it makes me wish it would hurry up with deployment already. 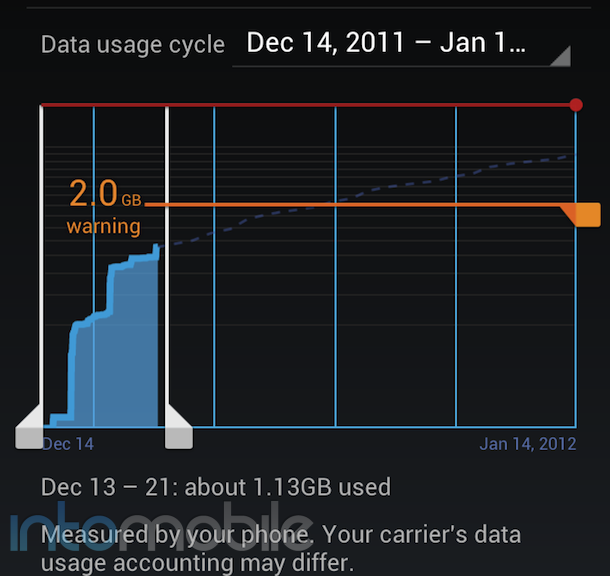 The thing to take away from this 4G LTE battle is that we’re living in an awesome time for mobile data, as all of these average download numbers would have seemed crazy a few years ago. For example, the house I’m staying at uses AT&T’s U-Verse service for Internet and the company’s 4G LTE averaged a faster download speed than this hardline connection. That’s crazy.

The day-to-day impact is more important than just speedtests, as pages load faster, files download in an instant and watching videos or streaming music is simple and easy. Many of the barriers of mobile data start to disappear and it opens the door for a host of innovative new apps and services.

The only issue with these blazing speeds is that it makes it so much easier to blow past your data caps. I’ve had the Galaxy Nexus for less than a week and I’ve already blown through 1.13 GB of data – I know this thanks to the new data usage monitor built in – and that’s without any heavy video streaming or using a music streaming service full time.

So, we’re getting incredible mobile networks which enable a new class of apps and services but these are also somewhat hamstrung by data limits or “usage-based pricing.” One step forward, two steps back …

Nuance announced today it has signed an agreement to acquire Vlingo, a popular mobile voice assistant for BlackBerry, Android and...