Andy Rubin (pictured above, left), the father of Google’s mobile operating system, just posted this status update on his Google+ account: “There are now over 700,000 Android devices activated every day.” At first glance it comes off as a hugely impressive number, that’s almost 5 million devices per week, but according to our estimates Android growth is slowing down. Back in May Google was saying they were activating over 400,000 devices per day. In June that number was raised to over 500,000 per day, but more importantly Andy Rubin, via Twitter, said that the activation rate was increasing at a rate of 4.4% week over week. Using Andy’s growth rate we calculated that by the end of October 2011 Android activations should be in the over 1,000,000 per day range. So what happened? It would be foolish to blame the iPhone, Windows Phone, or any other platform for this slow down. We think what we’re witnessing is the inability for smartphones to scale down to feature phone prices without sacrificing a significant amount of functionality.

There are sub $150 Android smartphones out on the market, but you don’t really want to be caught using one. Build quality is typically nonexistent, you can forget about having a responsive interface, and most applications in the Android market refuse to run on what’s usually a 320 x 240 pixel display. Earlier this year we had a conversation with Eldar Murtazin, the Editor in Chief of Mobile-Review, about the future of Android. He said that many folks are going to be let down by where Android is going to go in 2012, that Google is going to focus on enabling the creation of $100 smartphones. At the time we thought that Google aiming for the low end seemed a bit off, but now it makes an incredible amount of sense.

As Nokia likes to say, “the next billion” is where the market potential is.

Update 01: Here’s a chart from Twitter user @ThembeK (here’s his LinkedIn profile) that illustrates (in red) where Google Android activations would be if Andy Rubin’s 4.4% week over week growth was actually true. The reality is in green, at just 1.4%. 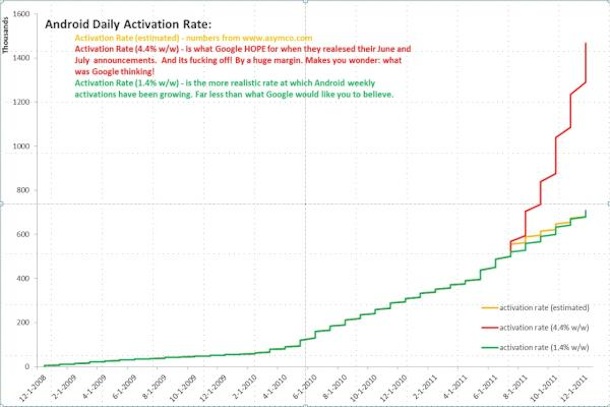 Update 02: To those of you who think the point we’re trying to make about Android growth slowing down is incorrect, read what this analyst has to say. Hint: He agrees with us.