If you’ve ever read one of my articles, chances are that about halfway through you developed an extreme urge to scroll to the comments section and hurl a string of expletive at me because what I wrote doesn’t jive with how you perceive the world. It’s OK, I still love you, and you’re not alone. People love to throw their thoughts and opinions on stuff they see on the internet all the time, which is why blogs such as this one are so popular. Sure, some people turn comments off, like John Gruber from Daring Fireball; some sites depend on comments to improve their content, like Asymco; and then there’s YouTube, a site that has comments, but said comments are so toxic that reading them can actually lower your intelligence. Anyway, if your favorite site uses Facebook comments, then we’re happy to announce that starting today you can now comment on said site using your mobile device. This feature wasn’t enabled until today, which is pretty insane when you think about how long the iPhone, Android, and smartphones in general, have been out on the market. 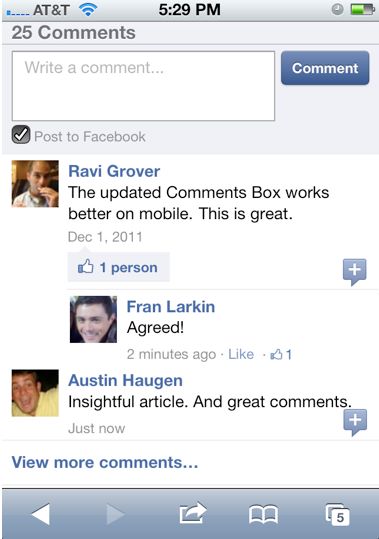 While we’re on the topic of comments, I’m curious to know, what do we have to do to get you to comment more on our site? There are a few regulars who always chime in on our posts, my least favorite being some crazy guy from Sweden who absolutely loathes Windows Phone, but I’m looking to get more people to “engage” (loathe that term!) with the IntoMobile team. Should we switch to a different commenting system, alter the type of content we produce, something else that I can’t think up this early in the morning? A lot of you like to talk to us via Twitter, and that’s great and all, but comments are where it’s really at.

Layar, one of the innovators of mobile augmented reality, recently announced the release of its new social experiment called Stiktu,...