It was another banner quarter for smartphones, as the latest Nielsen numbers said that over 60 percent of those who bought a phone within the last three months chose a smartphone over a feature phone and most of these users chose an Android or iPhone.

Android still led the U.S. market for the latest period but the iPhone 4S did a credible job of closing the gap. That may seem expected but you do have to remember that the iPhone 4S is one device, while the Android figure is based on multiple handsets at multiple price points on multiple carriers. The report found that 44.5 percent of those surveyed in December said they chose an iPhone and that’s a massive jump from 25.1 percent in October. 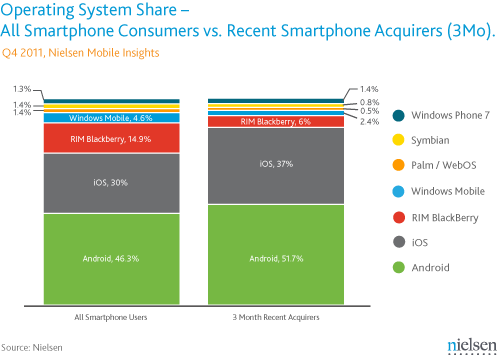 When we talk about things like market share, it’s important to remember that this is just one metric, even if it is a valuable one. Apple makes its money by selling devices, so the more market share it has, the more money it makes – but Apple also makes a ton of profit off its devices, so it could generate more revenue with a lower market share.

As for Google, it makes money via advertisements, so market share is important to it too but nearly any time a user is on the web on the go is a positive for Google. Its mobile advertising business has already crossed the $1 billion mark and much of that revenue comes from iPhone users.

If you want to see what the fuss is about the iPhone 4S, check out our hands-on video below.

Recently, we wrote about the progress the folks over at CyanogenMod were making on baked ROMs for the extinct HP...