Research In Motion dropped the bomb Sunday night (conveniently during a very popular football game) that co-CEOs Jim Balsillie and Mike Lazaridis would be stepping down from their leadership positions at the top of the company and as chairmen of the board. Thorsten Heins will be taking over as CEO of RIM but there are still a lot of questions remaining about the timing and what can the BlackBerry maker do to reverse its downward spiral.

Balsillie and Lazaridis will still have roles with the company that they’ve been at for more than 20 years, as Lazaridis will become vice chairman and Balsillie will remain on the board. As predicted, Barbara Stymiest will take over as chairman. While the two have been taking a lot of heat over the last 18 months or so, it should be noted that they did build and shepherd a company which grew from nothing into a multi-billion dollar company that has been a point of national pride for Canada.

It wasn’t that long ago where carrying a BlackBerry sent a clear message: I’m a business person and I’m probably important. With world-class e-mail and communication capabilities, an architecture which made it tenable for many financial and governmental institutions to use, BlackBerry and RIM were at the forefront of smartphone technology. RIM essentially locked up the enterprise mobility market for more than a decade (it still is the big dog in this space) and raked in the profits.

The iPhone (and Android) cometh 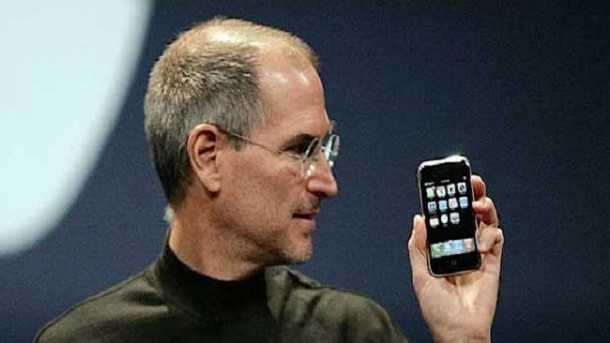 It’s very simple to say that the introduction of the original iPhone changed everything but … it kind of did. Apple’s iPhone was a leap forward in what consumers could want or expect from a smartphone and it also directly influenced the creation of the Android software, which is now responsible for nearly half of the world’s new smartphone purchases. These both represented many challenges for Research In Motion, although it didn’t seem to want to admit that.

The basics of the iPhone were already around at the time it was introduced, as you could get e-mails on your handsets, touch to interact with them and even download programs to augment your device. What Apple did was advance these capabilities in such an elegant way that consumers demanded to use it because it was better and more fluid than what was on the market. Not only did this make the entire pie for smartphones larger, it created a significant threat for RIM.

RIM was used to having a few customers to sell to: the various mobile operators and large companies which purchased BlackBerry units by the fleet – we’re talking 5,000 to 100,000 at a time. Going directly after consumers was something new to RIM and while I think it eventually found some good messaging and commercials around BBM and BlackBerry 7, it took a long while for it to understand that people wanted their devices to be “cool.” Even if the iPhone took the bulk of RIM’s consumer sales, its enterprise lock-in was pretty much untouchable, right?

At the time of the first iPhone, I was covering enterprise mobility over at InformationWeek, so a good chunk of my writing was about the latest BlackBerry, how PBX systems could be better integrated with mobile devices, the importance of having provisioning capabilities on your smartphone and other business-centric things. But over the course of the first year of the iPhone, I kept on hearing about how more and more people wanted to use their iPhone to get their corporate data.

This didn’t fly with many IT departments because the iPhone categorically was not as secure as a BlackBerry but it didn’t matter … workers wanted to use their iPhones. At first, I saw a lot of companies making exceptions for the C-level workers to get corporate data on an iPhone or employees would just start carrying around a BlackBerry and an iPhone. When the iPhone 3G hit with a consumer-friendly $199 price point and more corporate-friendly features, that’s when I really started to hear IT departments complain because the floodgates were opening and they couldn’t stop it.

Don’t get me wrong, RIM’s still the largest provider of smartphones for businesses and the way its architecture works means that businesses can’t transition overnight but Apple represents a major threat for business customers with its iPhone and the iPad.

Having to fend off Apple and iOS would be bad enough but Balsillie and Lazaridis were also facing the multi-billion dollar Google and its mobile ambitions. Google’s Android was built from the ground-up with touch input, applications and real web browsing – more importantly, it also offered handset makers and carriers a free smartphone platform which could compete with the iPhone. While Android was very clunky to start off with, the platform smartly evolved into a very good operating system.

Balsillie, Lazaridis and RIM couldn’t or wouldn’t adapt to the emerging realities of the new smartphone world. The BlackBerry platform was ideal for sending and receiving messages in a secure environment but it was never built to properly handle modern web-browsing and the increasingly-popular ability to run applications. While RIM made moves to improve some aspects of its platform, we entered 2012 with RIM still having a platform that required restarting when installing new apps and we’re still many months away from seeing BlackBerry 10.

When I say that perhaps RIM couldn’t adapt, I mean that its large base of enterprise customers makes rapidly evolving the BlackBerry platform difficult to do while retaining backwards compatibility. But I wouldn’t cut RIM too much slack in this department, as every major mobile player had to adjust to the new smartphone reality. Microsoft also had those legacy concerns with its mobile software but it started fresh with its Windows Phone platform. Samsung seemed to be able to pivot relatively quickly to climb to the top of the mobile market and even Nokia finally was able to adjust its business too.

Unlike these companies, RIM has control over its software and hardware, so it had the potential to implement changes in a meaningful way quickly if that’s what Balsillie and Lazaridis insisted upon. 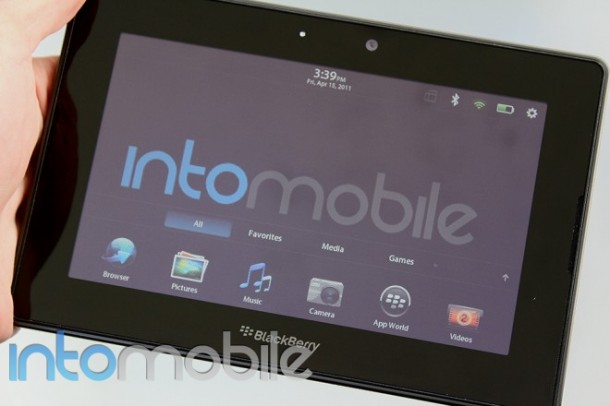 The last time I was really excited about RIM and found it to be innovative was when it introduced the PlayBook tablet because at the time, it seemed like a credible iPad competitor that was packed full of specs and an exciting new operating system. There was some real excitement around RIM but the device took another six months to come out and it didn’t even feel like it was complete, as we’re still waiting for the BlackBerry OS 2.0 software to bring native e-mail and calendar.

The PlayBook came out to mixed reviews and didn’t sell well at all – RIM eventually made a large write off based on poor sales. Meanwhile, it continued to release multiple BlackBerry smartphones which were never horrible but none of these ever excited the business, consumer or developer communities. It seemed like RIM felt like it could continue to push out the same devices with slight improvements and somehow outdo Android and the iPhone.

Many of the company’s problems seemed to come to a head in 2011, as RIM released uninspiring BlackBerry 7 devices, it faced embarrassing outages, saw high-profile questioning of its leadership and faced legal issues around the globe. This caused its stock to be battered over the last 12 months – RIM has lost about two-thirds its value in the last 14 months.

Looking back, it’s funny that the tablet which RIM basically bet its company on was called the “PlayBook” because it’s clear that Balsillie and Lazaridis didn’t have the right one.

Time and time again, the co-CEOs failed to bring the company to the forefront of the mobile space when it came to industrial design, user-friendly software, marketing or having a world-class app developer environment. While devices like the Bold 9900 were steps in the right direction when it came to hardware design, the software was still two steps behind the competition.

If you’re trying to reverse a downward trend, being behind the curve doesn’t help. Neither does not articulating a clear strategic vision that has a real chance of working.

Out with the old 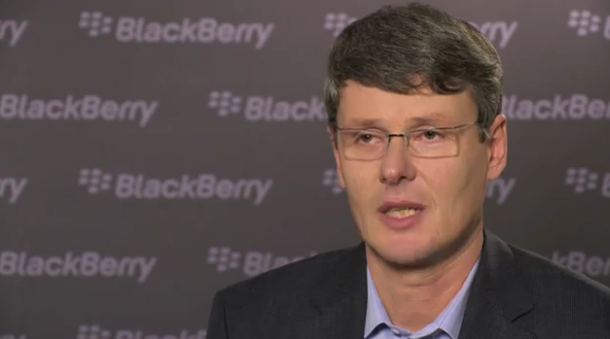 Heins takes the reins at a difficult time for the company but it’s not as dire as some would like to paint it to be … yet. RIM is not the Palm of a few years ago, as it still has the resources to potentially reverse this tailspin.

“We have a strong balance sheet with approximately $1.5 billion in cash at the end of the last quarter and negligible debt. We reported revenue of $5.2 billion in our last quarter, up 24 percent from the prior quarter, and a 35 percent year-to-year increase in the BlackBerry subscriber base, which is now over 75 million,” Heins said in a prepared statement.

That doesn’t mean things are going to be easy for Heins or RIM but it appears like he will have the ability to really implement wide-reaching strategic decisions. While we don’t know much about Heins, we do know that he has publicly spoken about potentially licensing the BlackBerry 10 software to other handset makers like Samsung or HTC. Such a move would be a major change from RIM’s past but just because it’s different doesn’t guarantee that it would be successful.

We should be getting a nice look at BlackBerry 10 in February at Mobile World Congress and Heins gushes about it in the video below while also mentioning how difficult it truly is to build a new mobile platform from the ground up. Heins will be getting a little bit of leeway as the new leader of RIM but stockholders, the market and consumers won’t care how new he is or what his role is if RIM can’t put out great smartphones with world-class software soon.

Can he pull it off?