You’ve probably heard that major smartphone makers are suing each other in an effort to stop certain products reaching the market. HTC and Samsung are sued by Apple, which in turn is sued by Samsung. But that’s not all, with these smartphone wars going beyond the wildest imagination, even involving some smaller companies most of us never heard of before.

For instance, “Graphics Properties Holdings” has patents from the now-defunct Silicon Graphics; Gemalto is the world’s largest manufacturer of SIM cards; InterDigital is a 40-year-old company that helped invent many basic mobile phone technologies; and VirnetX is a security company wrangling with Cupertino giant over VPN access technologies.

You can see how all this comes together from the two charts below with the second one showing who holds how many patents. From that image alone, you can easily tell why Google acquired Motorola – for its massive library of 17,500 patents… Anyway, here are the charts. 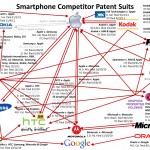 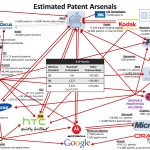 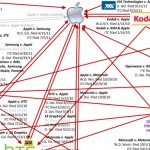