HP announced on Wednesday that, starting today, it’s making part of webOS available to the open source community. Each month, HP will release major portions of webOS, a few  pieces at a time, until the entire code base is made public. HP expects to release the full code base by September and is calling the final release Open webOS 1.0. You can see the release schedule at the bottom of this post.

The first component that’ll be made available to the public is Enyo 2.0, HP’s development tool for webOS. Enyo is available now for download from HP’s new Enyo website or github. HP’s trying hard to get developer support and is releasing Enyo with a variety of documentation and forums to help build a community around webOS.

It’ll be a difficult task to get people excited about webOS again, especially in light of Apple’s recent earnings. If you were a developer, would you spend your time working with Enyo which generates zero revenue or iOS which paid its developers $700,000 in the last quarter alone? 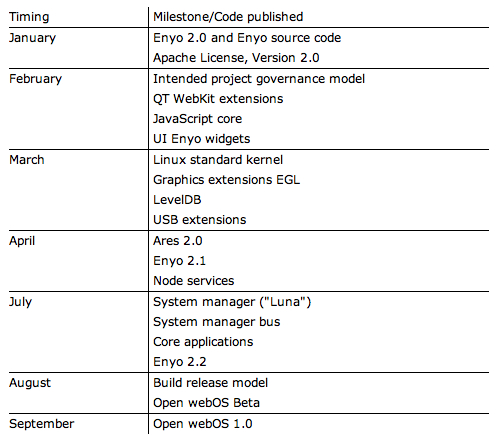