Microsoft’s Windows Phone operating system is 15 months and 10 days old, and while it has failed to gain any meaningful traction in the smartphone market, one thing that we appreciate is Microsoft’s willingness to make sure that everyone’s device is up to date. In other words, if you picked up a Windows Phone on launch day then you’ve thus far received all the updates that the platform has received. Something tells us this will also be the case for Tango, the version of Windows Phone that’s slated to be shown off next month at Mobile World Congress, but what about Apollo? We know very little about Apollo, better known as Windows Phone 8, but we do know it’s supposed to be the version of Windows Phone that finally lets vendors build “superphones” that can compete with the likes of the Samsung Galaxy Nexus or Apple iPhone 4S. So the big question is will today’s Windows Phones be upgradeable to the next generation version of the operating system? 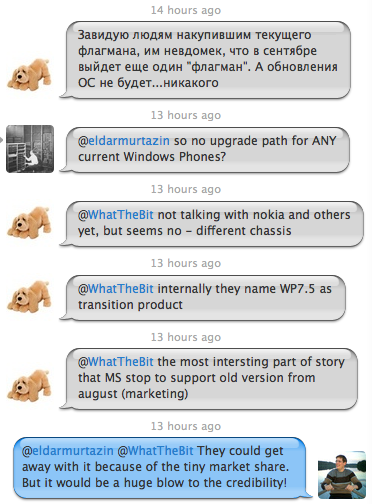 According to Eldar Murtazin, the answer is no. Last night we had a quick chat with the Editor in Chief of Mobile-Review on Twitter and he suggested that today’s Windows Phones will be left in the dust come September when Apollo is due to take the spotlight. Now yesterday we posted a story that said Windows Phone 8 will run Windows Phone 7.5 apps, but Microsoft wouldn’t say anything further about how developers will write apps for Apollo. Could Microsoft seriously be giving Windows Phone a heart transplant like we suggested last week?

If all of this is indeed true, then how are people who bought a Nokia Lumia 800 going to feel by the end of this year? Sure, it’s impossible to keep up with technology, but to go from being a flagship to being ignored in the span of 10 months seems kind of unreasonable.

Update: Eldar’s tweet in Russian translates to: “I envy people bought the current leader, they do not realize that in September, will have a “flagship”. And the OS upgrade will not be any …”

Microsoft: next version of Windows Phone will support current apps

Microsoft will release Windows 8 later this year and its influence on Windows Phone is not yet known. Many people speculate that Microsoft...