Mobile World Congress has officially kicked off and ZTE didn’t waste any time announcing an obscene amount of devices today. From Android phones, high-end to low-end, along with a new custom user interface, a few tablets, as well as a new Windows Phone, ZTE isn’t playing around in 2012. 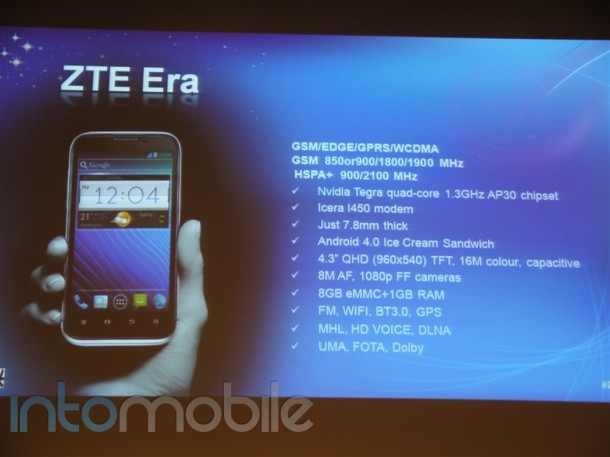 By far one of the most impressive phones during the announcement was the ZTE Era, which is up there with the likes of the HTC One X and other high-end devices alike. The ZTE Era runs on the NVIDIA Tegra 3 quad-core processor with NVIDIA Icera 450 HSPA+ modem, and rocks a 4.3 inch qHD display, 8 megapixel camera, front-facing camera, 8GB internal storage (expandable), with Android 4.0 Ice Cream Sandwich running the show. Probably one of the most impressive features about the ZTE Era is that it’s only 7.8 mm thin. Not only does this put it in Droid RAZR territory but it also may share the uncomfortably thin in-hand feel found on Motorola’s offering. We’ll just have to wait and see. 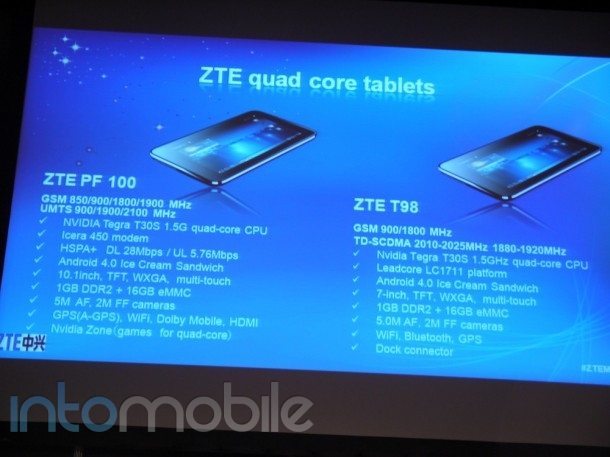 Other notable quad-core devices include the ZTE PF100 and ZTE T98. Both share the a generous amount of specifications, with the exception of the PF100 being a 10.1 inch tablet and the T98 being a 7 inch tablet. Both powered by a 1.5GHz NVIDIA Tegra 3 quad-core processor, 5 megapixel rear-facing cameras, 2 megapixel front facing cameras, 1GB of RAM and 16GB of storage, ZTE’s new quad-core tablets hit all the right notes. 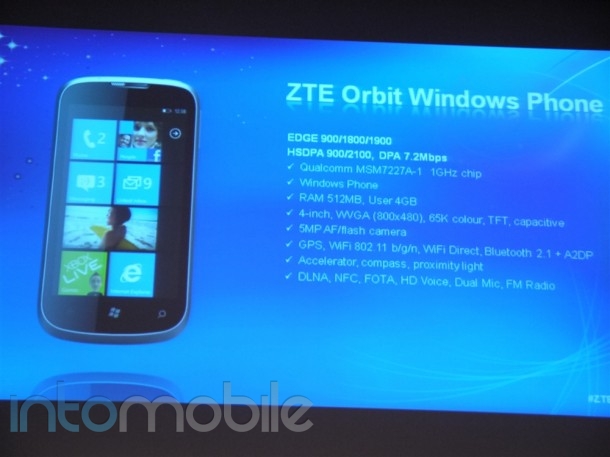 We also got to see ZTE’s upcoming Windows Phone handset, the ZTE Orbit. When comparing the Orbit to the likes of the Era, it looks a bit under powered. Sporting a single-core 1GHz Qualcomm MSM 7227A-1, 4 inch WVGA display, 5 megapixel camera with LED Flash, 512 MB of RAM, 4GB of storage (no mention if it was expandable), WiFi-Direct, and other specs like WiFi, Bluetooth, etc. Expect to find the ZTE Orbit in select markets in the second quarter of this year. 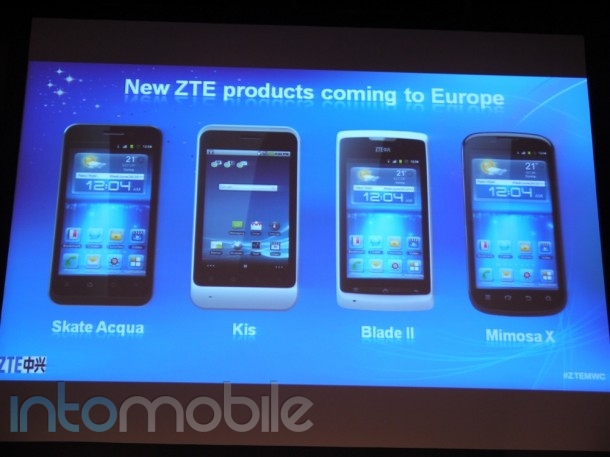 ZTE hasn’t forgotten about the lower-end devices and has announced the Kis and Skate Acqua. Neither device will be vying for your attention like the Era but both should provide a nice offering to the demographic the company is aiming for. The Kis is will be an entry-level handset with a 3.5 inch display, where the Skate Acqua is just a marginally improved successor to the original ZTE Skate.

The ZTE Blade II is the obvious successor to the original Blade, and is essentially just refreshed with a single-core 1GHz processor. It’s not necessarily ground-breaking but we’re glad to see that the Blade II is breaking the 1GHz barrier.

The Mimosa X had previously been announced by ZTE and it’s a Tegra 2 toting device with Android 4.0 Ice Cream Sandwich. The device also sports NVIDIA’s Icera 450 HSPA+ modem. Expect to see a 4.3 inch qHD display, and 5 megapixel camera on board. The Mimosa X isn’t the most powerful device but it’s well-rounded to enough to be impressive. 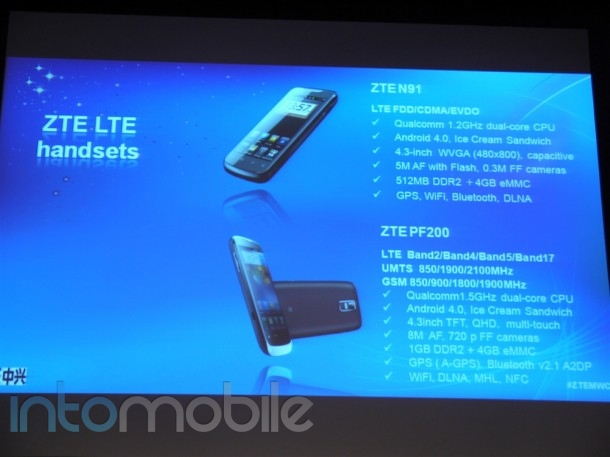 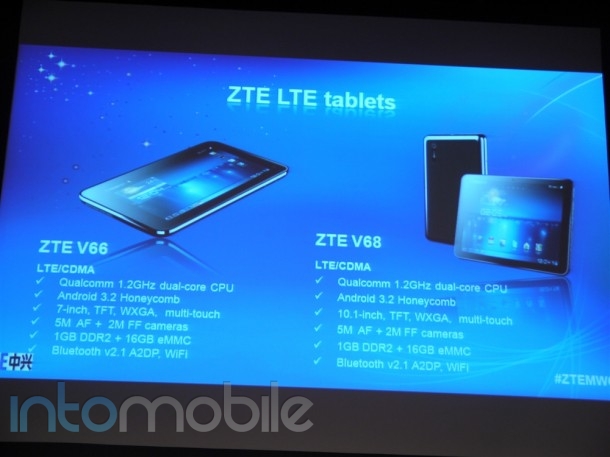 Also announced were a few LTE-enabled tablets, the ZTE V66 and V68. Both devices are identical in the apecification department but come in 7 and 10 inch version. Both have a 1.2GHz dual-core Qualcomm processor, WXGA displays, Android 3.2 Honeycomb, 1GB of RAM, 16GB of storage, and of course, LTE. 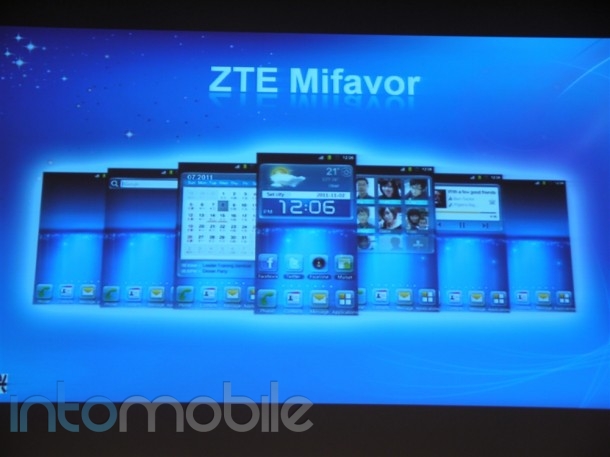 ZTE also introduced a new custom user interface for its Android handsets, called Mifavor. In a nutshell, there’s virtually nothing that it brings to the Android space we haven’t already seen before and it looks like it’s something we’ve seen time and time again. Many of the features reminded me of several home replacement applications you can download for free on the Android Market but ZTE also wanted to emphasize that a part of the Mifavor UI experience will be coming in the form of ZTE-developed applications for Mifavor.

There you have it, folks. ZTE announced so many devices, it’s almost overkill. Still, that’s hard to complain about, as it’s pretty impressive to see just how hard the company is pushing this year. Stay tuned for more on ZTE’s new arsenal of phones and tablets!