The wildly popular Kindle Fire along with Apple’s iPad continues to lead the tablet market in shipments, according to the latest report conducted by IDC. The 7-inh Amazon tablet hands down is the biggest competitor to the Cupertino-based company’s dominate slate, with 16.8 percent of the tablet market and 4.7 million units shipped during Q4 (2011), followed by Samsung with 5.8 percent of the market. This kind of momentum has helped fuel a rumor that not only has a new 7-inch Kindle Fire on the way, but a 10-inch version all in the second half of 2012.

Okay, before you say: “the Kindle Fire is no where in the same league as the iPad,” IDC in its report mentioned Apple still had “an increase of 110.5% from 4Q10.” Apple also continued to lead the market with 54.7 percent of global market share despite being down from 61.5 percent in the quarter before. That being said, IDC expects Android to overtake iOS for global market share by 2015 (Android’s gradual rise shown in chart below). Tablets like the Kindle Fire could be the reason for all of these 7-inch iPad rumors, as Apple feels it may have to shake things up a bit.

First, you must keep in mind that this report accounts for tablet shipments, not real sales. Truth is, we don’t know the actual numbers when it comes to Kindle Fire’s sold because Amazon doesn’t release that information to the public. If nearly five million Fire’s shipped out, I’d bet the majority of those tablets never shipped back to Amazon, besides, people I know who have the Kindle Fire love it. The most impressive part about these Kindle Fire numbers is the fact that it wasn’t sold globally, so imagine when the new one releases to the world. 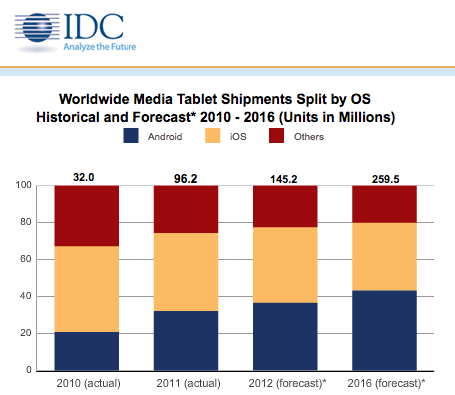 Virgin Mobile announced its latest Android device called the ZTE Venture at $100. The Venture is a QWERTY handset with...