Chances are that if you’re reading this you know what a SIM card is; it’s that tiny little piece of plastic that you shove inside a phone so that it can connect to a wireless network. The smallest SIM card standard currently on the market is the microSIM. Apple was the first to use it in their iOS devices, but these days you’ll find microSIM cards in numerous handsets from multiple manufacturers. In fact, we’re pretty sure that most of the devices announced at Mobile World Congress last month use the microSIM standard. Why go smaller? Because it gives phone makers more room to put things inside their smartphones, things like larger batteries or more complex circuitry. Anyway, Apple wants to go even smaller, and they’ve proposed something called a nanoSIM. For it to become a standard it has to get the thumbs up from the European Telecommunications Standards Institute. Now Nokia has their own nanoSIM proposal that RIM and Motorola are backing instead of Apple’s proposal. According to the Financial Times, Europe’s operators would rather go with Apple’s nanoSIM design. By the end of this week we should know which proposal will be approved. At the end of the day none of this matters since once the standard is set everyone will simply have to adapt and users couldn’t care less. 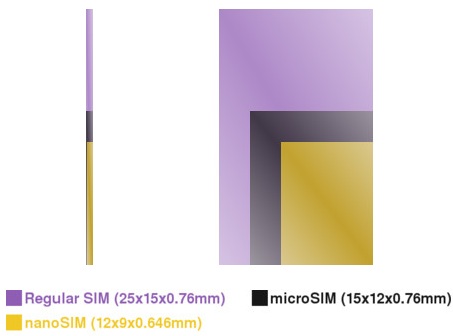 That being said, there are fears that Apple’s nanoSIM would mean that other companies would have to pay Apple patent fees in order to use their design. Sources with access to this whole nanoSIM debate say Apple is promising royalty free access to any and all patents regarding their nanoSIM proposal. In other words, companies will be free to use Apple’s standard and not have to worry about coughing up money.

Why is this a story? Because some tech sites are trying to spin this standards debate into a narrative where Apple is trying to somehow do something that no one else can do. That’s hardly the case. If Apple really wanted to, they could have just designed their own damn SIM card and forced operators to support it. Instead they’re going through all the right channels. And like all standards debates, there are multiple proposals, each with their own merits, but only one ends up being picked.