Nokia announced a new phone in Nigeria today, the Nokia 103. For some strange reason, the company hasn’t published any details about this device whatsoever on their website. We contacted Nokia to try to get some information about the 103, but the only thing they were able to tell us was “we have not released a global press release”. Anyway, insider baseball aside, here’s what you need to know: The Nokia 103 is dust resistant, comes with an “anti-scratch cover”, has a 1.36 inch black and white display, flashlight, an FM radio (requires a headset), and an 800 mAh battery that should give you 27 days of standby time or 11 hours of talk time. Size and weight: 107.2 mm x 45.1 mm x 15.3 mm; 77 grams. 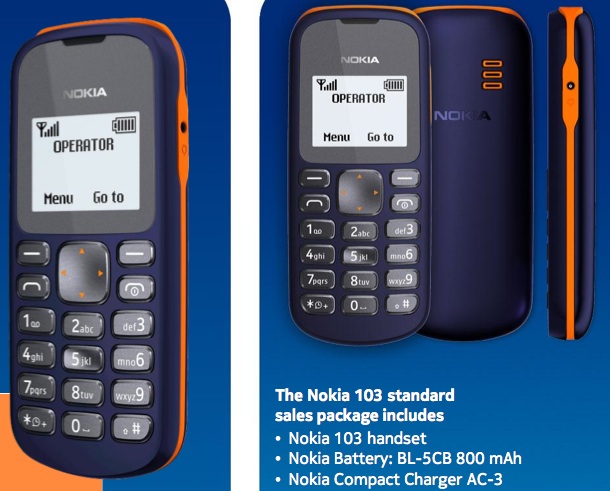 So, the key question, how much? 16 Euros before taxes and subsidies. That’s less than $21. Assuming you live somewhere with an 8.5% sales tax rate, that’s less than $23 all in. We can’t emphasize how much of an amazing accomplishment this is. Forget about quad core superphones, forget about $100 Android smartphones from China, a lot of people can’t afford to feed themselves, much less communicate wirelessly. The 103 aims to solve that. Better yet, when it gets resold, which it will be, it’ll probably go for less than $10. It’s devices like the 103 that keep us cheering Nokia on, because no one else is trying to penetrate this ultra low-end market.

For those of you who want to check out the 103’s official data sheet, check out this image. And as for when this device will hit the market, you’re looking at Q2 2012, which is anywhere between now and the end of June. Will the 103 ever leave Nigeria? Probably, but don’t expect to see this thing being sold in shops in Germany or the UK, even if there are people who would love this thing since it’s so easy to use and practically impossible to break.

[HUGE thanks to Benedict Evans]

Update: Nokia finally sent me the press release that was issued in Nigeria:

Nigeria takes the lead as Nokia launches its most affordable phone

In line with its strategy of connecting the next billion, Nokia, the world’s largest mobile phones manufacturer has unveiled its most affordable mobile phone to date – the Nokia 103 in Nigeria. Nigeria is the first market to launch this new device, which is designed specifically for people buying their first phones.

The Nokia 103 is targeted for people looking for an affordable and practical phone that gives them the essential experiences needed to help them progress economically and socially, without compromising on design and quality.

Apart from its fresh look, durable anti-scratch cover and anti-dust keyboard, the Nokia 103 is designed with long lasting battery life – 27 days standby time and up to 11 hours of talk time. Other features include built-in flashlight, FM radio, speaking clock and MP3 grade ringtones.

The Vice President Nokia West Africa, Mr. James Rutherfoord, said the choice of Nigeria as the lead market for this device underscores the importance of the Nigerian market and the need to empower millions of Nigerians who are yet to acquire a mobile phone.

Nokia is the only company providing mobile devices to people in virtually every market of the world, across economic segments. Of the world’s 7 billion people, 3.2 billion don’t have a phone yet due largely to economic constraints. According to Mr. Rutherfoord, “Nokia has been progressively lowering the entry barrier to the market while continually increasing the capability of our devices and delivering phones with contemporary fresh designs”. Nokia is committed to helping to mobilize the next generation – the next billion and beyond – and ensure they have access to the advantages of mobile technology. With the Nokia 103, Nokia is making mobile connectivity a reality for lower-income consumers.