In last year’s investigation into data speeds in the wireless industry, PCMag found that Verizon Wireless came out on top with its speedy LTE network. Over the past year, AT&T has started building out an LTE network, T-Mobile has enhanced their HSPA+ 42 mbps coverage, and Sprint has…umm…committed to building an LTE network starting mid-2012. But was it enough for any of these companies be able to unseat the reigning champion?

In 2011, Verizon handily won the 4G category as it was the only carrier at the time to feature a next-generation LTE network. Flash forward to 2012, and AT&T has a steadily growing LTE network, and T-Mobile has a 3.5G with theoretical speeds of 42mbps.

When it came to this year’s crown for 4G download speeds, AT&T took the top prize with an average of 9.12mbps. AT&T was followed closely by Verizon (7.35 mbps) and T-Mobile (5.53 mbps), with Sprint bringing up the rear at an abysmal 2.81 mbps. For upload speeds, Verizon took the top bidding with an average of 5.81 mbps, followed closely by AT&T at 4.91 mbps. T-Mobile and Sprint took spots 3 and 4, with average upload speeds of 1.32 mbps and 0.97 mbps respectively. 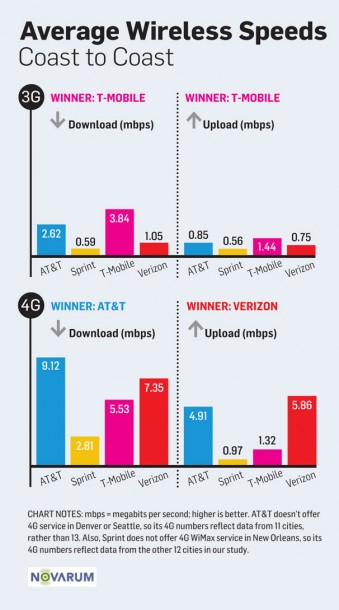 So, just want information can we glean from the PCWorld report? LTE is, was, and will continue to be stupid fast, providing users with the ability to stream media, play online games, and surf the web with ease. By the time this report comes around next year, at least 3 (if not 4) of the 4 major carriers in the United States will have partially implemented LTE networks, and should all provide roughly the same speeds we see on AT&T and Verizon today. At that point, the 4G portion of this test will become irrelevant, as once you get above around 5 mbps on a mobile device, the user experience should be excellent across all networks.

Where we still need to see improvements is in the 3G networks, as data speeds in rural areas of the country which won’t be covered by LTE will continue to fall behind. AT&T and T-Mobile are the bright spots in this respect, with data speeds that are “good enough” for most tasks people do on their smartphones. The CDMA carriers (Sprint and Verizon) really need to bolster their 3G networks to provide 3.5G speeds, which should be possible with some spectrum freed up by the LTE buildouts.

We’ll see how these trends play out over the next few years as we await a nationwide LTE footprint.