According to a tweet from Devin Balentina, who runs The Nokia Guide, Samsung has started pushing out Android 4.0 Ice Cream Sandwich to owners of the Galaxy Note. The update weighs in at roughly 320 MB and says it has a new “S Note App” and “S Note Widget”. The South Korean handset vendor has already issued a video demoing what they’re going to include in their Note ICS update, so keep on the lookout to see if what they showed off actually ended up in the final build. We don’t have a Note on hand to test the software out, but we have a hunch it’s going to be a lot like the Galaxy S II update. Meaning you’re not going to be able to tell you have ICS on your device since the theme hasn’t changed. 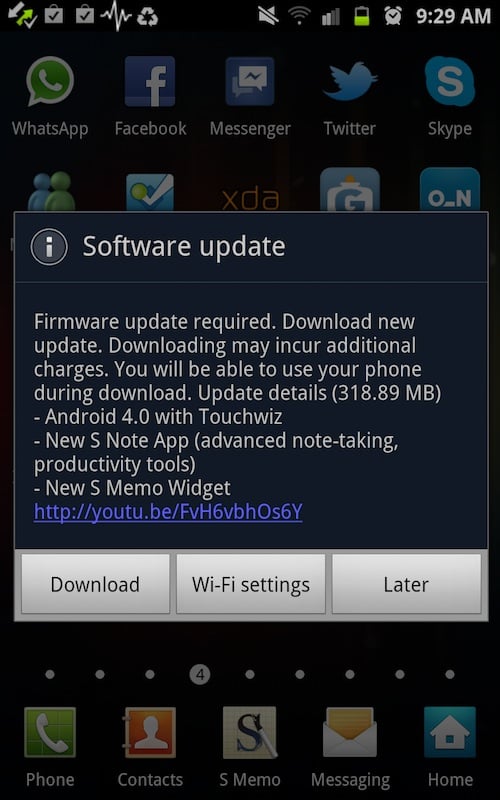 Now as for when Americans are going to see their Notes get updated to ICS, earlier this week we highlighted a video shot by Android Central which showcases ICS running on an AT&T Note. That particular Note was on display at CTIA, which means there’s a good chance that North American users aren’t going to have to wait that long. For a device that’s sold well over 5 million units, we’re glad that Samsung has chosen to update it so quickly.

The bigger question, at least in this writer’s opinion, is when are we going to see the new Note? Samsung likes to refresh their products every 12 months. The Note has been out for 7 months. The Galaxy S III that was announced last week, that’ll probably be used to build the new Note. The extra horsepower that quad core 1.4 GHz Exynos processor provides will most definitely be welcome inside a device with a screen that measures over 5 inches diagonal and is hopefully non-PenTile.

Samsung buys mSpot in an attempt to take on iCloud, is this the beginning of the end?

Companies like to jam as many features into their smartphones as humanly possible so that they can lure potential customers...