Since Apple released the iPhone 4S in October, its flagship feature Siri has been able to help tremendously in users’ daily lives with productivity and even offering advice. In fact, I bet you didn’t know it can help you with buying or recommending a smartphone. So what’s the best phone out there? According to Siri, the Nokia Lumia 900 is.

Yes, this is one of those twisted stories in tech when something doesn’t go quite as expected and the story ends up being a bit humorous. Apple’s Siri integrates Wolfram Alpha, a “knowledge engine” it uses to respond to questions when it can’t supply an answer on its own. Because Apple can’t control any of the information on Wolfram Alpha, the answers it returns may not always be in Apple’s favor. This is one of those cases. 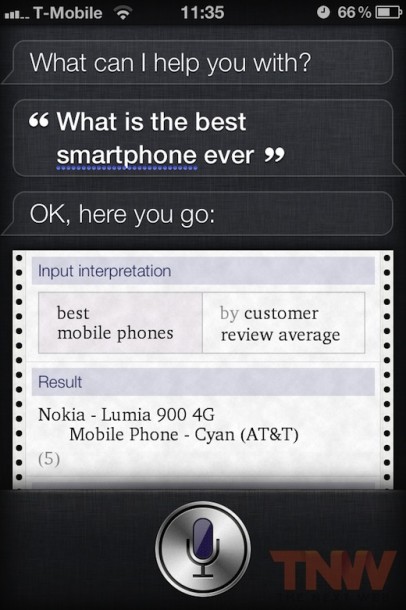 Siri tends to return different answers to the same question if you ask it more than once, so if you have an iPhone 4S and ask Siri “What is the best smartphone ever?” you may not get the Lumia 900 as a result. That didn’t stop Microsoft’s Windows Phone team from eating this up though. They tweeted this morning, “We have to admit, occasionally, Siri knows what’s up.” with a link to the news.

This isn’t the first time Siri has made the news for scandalous behavior. For a while, it was considered a political activist against birth control and abortion until Apple pointed out it was just a glitch. Shortly after, Siri allegedly told one child to “shut the fuck up.” Even Ellen Degeneres was surprised by the robotic assistant’s witty personality. Siri just can’t escape the paparazzi these days.

[via The Next Web]

Samsung may be dominant in its home country of Korea but its influence doesn't extend to all Asian countries. According...