Let it be known that May 29 seems to be the new unofficial date to leak upcoming Apple products. First, alleged images of the next iPhone’s casing hit the web and now BGR claims it has received access to the rumored 3D Maps app in iOS 6.

It’s been all but confirmed by Apple for a while that the company will be ditching Google Maps in the next release of iOS in favor of its own mapping technology built from scratch. It just makes sense considering all the tension between Apple and Google nowadays. The new Maps app developed entirely by Apple would include a flagship mapping feature to view cities and structures in 3D.

BGR’s snapshots of the purported Maps app confirms the rumors. The map in the photos doesn’t look like anything from Google Maps and a 3D switch is present in the lower left corner. Apple appears to have redesigned the top navigation bar with three components: a directions button, search field, and bookmarks/recents button. 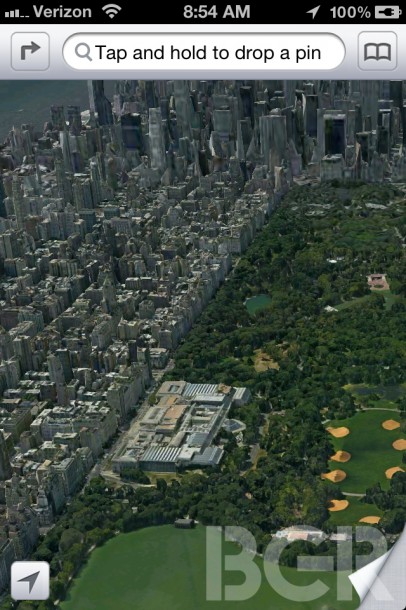 There are a few questionable aspects of the screenshot I want to point out, however. The small book icon in the top right is not centered vertically within the button — it’s toward the bottom — which leads me to consider the possibility of some photoshopping. Also, you’ll notice the navigation UI has a light gray color scheme. Up until now, that has only been present on the iPad while the iPhone has retained the darker shade of gray since iOS’s beginnings in 2007. Apple could be switching to the lighter gray UI on the iPhone in iOS 6, but with the information we currently have laid out, it doesn’t quite make sense for now.

I’m by no means attempting to debunk the Maps app screenshot. Rather, I’m suggesting that this may not be the version we see in iOS 6 once development is complete.