It’s no secret that more people in the world are starting to own smartphones. This known fact has turned into an incredible opportunity for retailers to push its products through these handsets, hoping users get more dependant on shopping on their devices. Indeed, because of these efforts, people are getting more comfortable with mobile payments, as a recent Nielsen survey suggest.

According to a June 2012 survey among 5,000 Android and iPhone users in the U.S., Nielsen found that 47 percent of them have used a native shopping app on their phones. Analysts also believe that 45 million U.S. consumers have used shopping apps, with an average usage of 17 times per month (per person).

Surprisingly, when you count the most time spent on an app, the leader of this mobile wave isn’t eBay, Amazon or Groupon, but it’s Shopkick. Yes, you heard correct. Shopkick is a service that offers users deals while in the store, and it attracted 6.5 million uniques in the month of June. Albeit, these are impressive numbers, but it still falls behind the biggest auction site on the internet, eBay. eBay Mobile not only ranked second in time spent, but came in first for most unique visits.

We’re not at all surprised by these Nielsen numbers, and we expect these kind of numbers to grow over time.  Don Kellogg, director of telecom insights at Nielsen, shares the same sentiments, saying “Retailers are finding that consumers are willing to use smartphone apps to enhance their shopping experience, and this data shows usage of shopping apps is growing.” Check the chart down below. 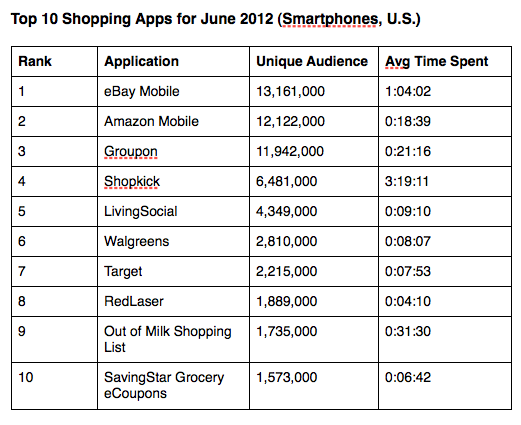 Nuance has announced a new voice-activated virtual assistant of its own. Unlike Google Now, Samsung S-Voice, and Apple’s Siri voice...