An image showing the Android 4.2.2 update has surfaced, thanks to a user on Reddit. We’ve known for sometime now that Google was testing the update, and that it would be hitting Nexus devices in mid-February. The new software supposedly addresses a pesky Bluetooth streaming issue with other pressing matters, such as security enhancements, device performance, minor cosmetic changes and more bug fixes.

Of course, to no ones surprise, Android 4.2.2 looks to be rolling out to carrier-unlocked Galaxy Nexus and Nexus 4 smartphones, as well as the Nexus 7 and Nexus 10 tablets.

Let us know if you’re seeing the update on your Nexus. 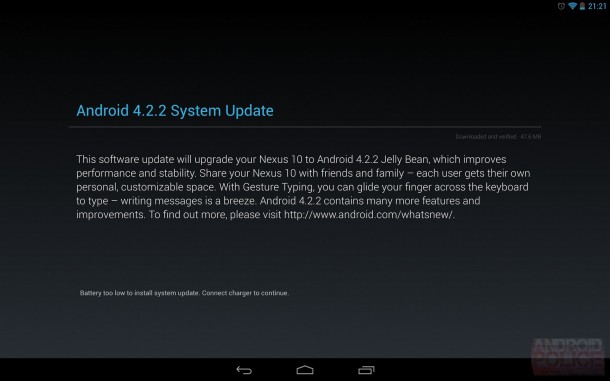 Verizon Wireless and HTC will soon start rolling out a new update for the DROID DNA. Software version 2.04.605.2 710RD...