Due to the inclement weather across the U.S., our Verizon Nokia Lumia Icon review unit arrived a little late, but as they say, better late than never! We’re hard at work on the full review, but just wanted to give you a quick look at Nokia’s latest Lumia device. Not only does the Lumia Icon rock amazing specs, a beefed out camera and a sexy design, it came in a huge 007 like case complete with glowing red LED lights inside the case. Also included are red Nokia Monster PurityPro wireless headphones, which go all the way up to 11. Opening the case up kinda made me feel like Ryan Gosling in Drive. And then I was looking over my shoulder for Cylons. So many emotions. Anyway…

As far as specs go, this Windows Phone is a powerhouse. A Qualcomm Snapdragon 800 runs the show, clocked at an amazing 2.2GHz. The Lumia Icon touts 2 GB of RAM and 32GB of internal memory. A 5 inch 1920 x 1080 Full HD OLED display commands attention, and is protected by a layer of Corning’s Gorilla Glass 3. The screen also has increased sensitivity, allowing users wearing gloves to use the touchscreen without any problems. The Lumia Icon runs the latest Windows Phone 8 software with the Nokia Lumia Black and Windows Phone 8 GDR3 updates in place. Response time is snappy, and the Snapdragon 800 processor powers through apps. We’re pretty impressed with the unit even though we’ve only had it in our hands for a couple of hours.

Check out the pictures below, and let us know what you think about the Nokia Lumia Icon. This could just be the Windows Phone that helps the struggling mobile OS gain some traction in an Android and iPhone dominated industry.

We’ll have the full review for you shortly. 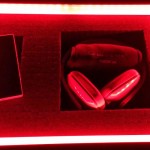 After much speculation, the top-notch Nokia Lumia Icon for Verizon Wireless has been officially announced. The device is the most...