Who says you need to sell phones in the West to be super-successful? Take Xiaomi as an example. The so called “Apple of China” has managed to emerge as the 5th largest smartphone vendor in the second quarter of the year.

Meanwhile, Samsung shipped 74.5 million smartphones worldwide, capturing 25% market share in Q2 2014, dipping from 33%. Apple, on the other hand, grew a below-average 13% annually and shipped 35.2 million iPhones worldwide for the 12% market share in the same period. Huawei is third and Lenovo holds the fourth position.

Overall, the global smartphone shipments grew 27% annually from 233.0 million in Q2 2013 to 295.2 million units in Q2 2014. However, the growth was mixed on a regional basis during the quarter, with healthy demand in Asia and Africa counterbalanced by sluggish volumes across North America and Europe. According to Strategy Analytics, we have changes in the operator subsidy to blame for this. 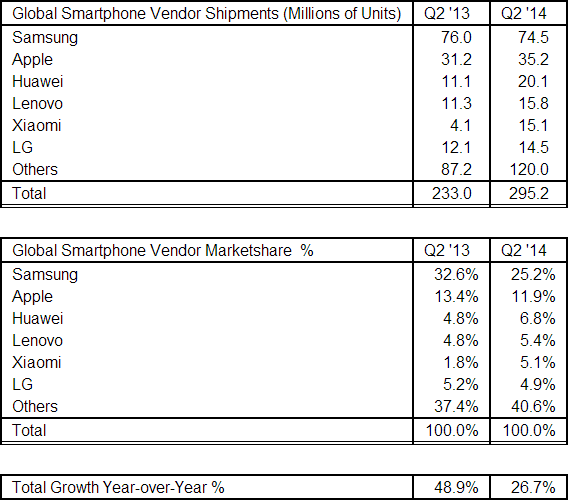 Xiaomi Mi4 up for pre-order in Italy!

Before you go, wow - it's available in Europe, I must add that this isn't the case of Xiaomi's expansion...