Say what? Yup, you read that correctly; BlackBerry wants to buy you out. In an effort to push the company’s BlackBerry Passport smartphone, BB is offering iPhone customers a nice payday if they trade in their iDevices and put it toward a purchase of a Passport via BlackBerry’s website. The promotion applies to Passports purchased from select retailers after December 1st, 2014.

So how much exactly will BlackBerry kick you down for your iPhone? Check out the screenshot below for an idea. 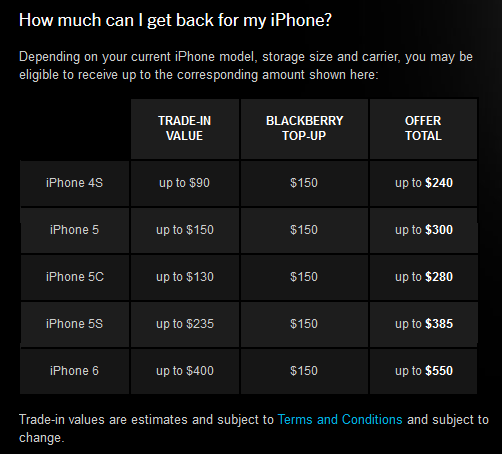 OK, so not that bad considering, but are iPhone owners really going to eat this one up? I’m not so sure, but we’ll see. The Passport is certainly a strange device, but its been getting good marks from BlackBerry fans everywhere. Maybe BlackBerry will be able too woo back ex-BlackBerry users who jumped ship after that whole Z10 fiasco? Who knows.

So, are you interested? Head here for the full details and get going.

It's almost Thanksgiving, which means Black Friday is just around the corner. Why wait until then to get a great...