Fuhu, maker of the Android-powered Nabi tablet, is back with another product in its kid-friendly line of devices. The Nabi 2 is a an update to the original Nabi tablet that bumps up the processor and improves the overall performance of the device. It’s an interesting product — the hardware is better than most Android tablets on the market, but it has a simple design that’s decidedly geared for kids. It’s a high-tech learning tool and entertainment device that my children couldn’t get enough of it. And with a price tag just under $200, parents and teachers are going to love it, too.

The Nabi 2 is a nice upgrade from the original Nabi, which had dual-core 1.1GHz ARM Cortex-A9 processor and 4GB of storage. The Nabi 2 boasts an impressive set of hardware specs including a 7 inch multi-touch capacitive touch screen  with 1024 x 600 resolution, a Quad-core NVIDIA Tegra 3 processor, 1 GB of RAM, 8 GB of Flash Storage, and 2-megapixel front-facing camera with 720p video. Other features include both Bluetooth and WiFi connectivity,  a microSD card slot, micro USB 2.0 port, mini HDMI, 3.5mm headphone jack, microphone and a 3,850mAh lithium-ion battery that's charged via a DC connector.

On the back is the Nabi grid, a panel with several rows of cube-shaped connectors that'll let you attach a wide variety of add-ons. Fuhu says it'll support car mounts, an external camera module, game add-ons and other accessories that'll plug into the back of the device. It's an interesting concept that lets Fuhu keep the price of the tablet down and still offer products that expand the functionality of the device.

Parents will also be pleased to know that the Nabi 2 ships with a protective rubber case. It covers the sides and corners of the device, but keeps the ports and the back Nabi grid exposed. Besides protecting it from a fall, the case also helps your child keep a good grip on the tablet.  The case is soft and flexible which means you can slip it off a little on the sides. Despite some rough handling by my kids, they never managed to remove it. The case is good for drops, but it offers no water protection. You have to watch out if your child is handling the tablet near drinks that can be spilled or a body of water like a lake or a pool.

The battery life is the only complaint I have against the device and it's a minor one. The Nabi 2 ships with a 3,850 mAh battery, which is smaller than the 4400 mAh of the Kindle Fire and the giant 11560 mAh battery of the iPad 3. Though the Tegra 3 processor has some battery saving features, it's not enough to make up for the smaller capacity.

For example, I handed the tablet to my kids and they got about 4-5 hours of non-stop usage. That's not terrible by any means, but it's not outstanding either. In the end, you just need to plan for it. If you have a long car trip, then make sure you have a way to charge the device. Personally, I like the tradeoff of having a faster device with slightly less battery life than a slower device that lasts all day. 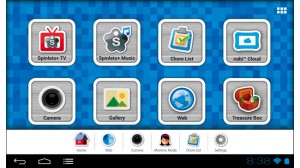 The software is what sets the Nabi 2 apart from its competition. Kids will enjoy the colorful, icon-based UI, while geeky parents will appreciate the underlying Android 4.0 Ice Cream Sandwich OS. The tablet is setup so kids can easily move from app to app and explore the device without accessing the core setting of the OS. As someone whose children have deleted apps and tweeted while using my iPad, I appreciate how nice it is to have a children's side of the device that's separate from the parent's side.

The parent's side is accessed via the appropriately named Mommy Mode. It's password protected so only adults can access this section. This part of the tablet lets you browse through the underlying Android OS. It's here that you'll find the standard Android web browser, settings and other familiar Android components. The Google Play store is not there, but there is a curated App Zone that gives you access to 500 kid-selected and mom-approved apps. You can also launch Skype and talk to grandparents who may live far away.

The tablet ships with 25 free games (some limited demos), 50 free songs, 30 free books, and a free 30-day trial to Spinlets+ TV, a kid-friendly video streaming service. Not surprisingly, my kids loved the games, like Angry Birds and Jett Tailfin Racers, that ship on the tablet, and their performance was as smooth as silk with the Tegra 3 processor. There's also a series of educational apps from Fooz Kids University that covers science, social studies, math and english.

If your kids are capable of doing chores, the Nabi 2 ships with a Chore List app that lets you setup and assign jobs for your children to do each day. Children can earn Nabi coins for completing chores (or lessons in Fooz Kids University) and then spend them in the companion Treasure Box app. Kids can spend their coins on games, apps, music, and wallpapers. 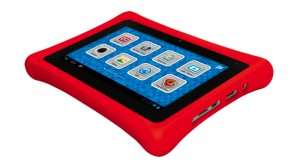 First and foremost, the Nabi 2 is an Android tablet which makes it more than a toy, despite it's playful design. This mixture of kid-friendliness with the power of the Tegra 3 places the Nabi 2 well above learning devices like the LeapFrog Leapster Explorer. Though it's still an Android tablet at heart, the Nabi 2 isn't as wide open as the iPad which has little to no parental controls. It's also much less expensive which makes it easy to hand over to your children without remorse.

The parental controls and the children-focused apps sets the Nabi 2 apart from the Kindle Fire which has parental controls, but connects to Amazon's website. My kids have a Kindle Fire that we use for reading and educational apps, but I'm uncomfortable with the close tie to Amazon. Amazon isn't bad per se, but I have run into problems with my children accidentally buying stuff (a $400 camera I left in my Amazon shopping cart) and accessing videos from my Unbox library. The Nabi 2, though, has a controlled environment with kids-only content that'll let you hand over the device to your kids and not worry about them getting somewhere they shouldn't.

After seeing how much my kids thoroughly enjoyed using both the educational apps and the games, there's little doubt the Nabi 2 will set a new standard for devices that target children. The Nabi 2 tablet will launch in the US in July. It will be available in select retail stores and online for $199.99.