LG took quite a while to follow up with its second Android tablet offering. Even though 2011’s G-Slate could stand on its own two feet against the competition, it was ultimately a dud. LG went back to the drawing board and stayed there for a couple of years. Now the company is back with a new tablet, the LG G Pad 8.3. Not only is this is a powerful tablet that can oust some of the competition around it, but it’s a well-designed and sleek piece of hardware that will make it a great companion device to its latest flagship smartphone, the G2.

The G Pad 8.3 is positioning itself against the likes of the new Nexus 7, Kindle Fire HD, and Galaxy Tab devices, but it’s also squarely pitting itself against Apple’s iPad Mini. With a solid spec list, sleek design, and nice software features, the G Pad stands a chance to cause a stir in the smaller tablet market.

The popularity of larger tablets nearing the 10 inch mark has been slipping in favor 7-8 inch tablets for a while now. Not only are these tablet easier to hold, but many ship at a more affordable price point. The kicker here, however, is that the G Pad will ship at a price point that’s on par with a good chunk of 10 inch tablets (around $500). In this review, we’ll see if the G Pad can woo customers away from the competition, even with the high price tag.

As far as hardware goes, the G Pad fits the bill in just about every area.

With a width of 126.5mm, the G Pad fits nicely in one hand, and allows for a near perfect experience when typing in portrait mode. It's also very light as well. At 338 grams, the G Pad is easy enough to hold in one hand for long periods of time without getting too heavy.

The face of the tablet is simple and to the point. The 8.3 inch display dominates the front of the device, with little else to speak of. The bezels around the sides are relatively small -- small enough for you to easily grip the tablet with one hand. LG left about an inch of space at the top and bottom of the tablet, which we're guessing is for an easier experience when using the tablet in landscape. Above the display, you'll find LG's logo, ambient light sensor, and 1.2 megapixel front-facing camera. 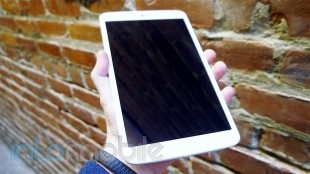 The sides of the G Pad offer up a the expected set of buttons and ports. The left side of the tablet is left bare, with the microUSB port and microphone on the bottom, power and volume rocker on the right side and the 3.5mm headphone jack, microSD card slot, and IR blaster on the top. The rear of the G Pad is clean and simple. Here is where the 5 megapixel shooter finds a home, as well as the stereo speakers and LG logo in the middle.

LG chose to leave out NFC on the G Pad, which is no bother to us, but some users may feel that this feature is a must. Given the price of the tablet, we'd expect LG to throw in the kitchen sink, but that's sadly not the case. Either way, NFC on a tablet doesn't make a lot of sense. Sure, it may have some use cases, but it's not going to keep us from using the tablet any less.

Although we were expecting to see the G Pad share the same CPU as the G2, the Snapdragon 600 is no slouch. The tablet went through a handful of benchmarks without breaking a sweat. The G Pad fell in line with the likes of the HTC One and Galaxy S 4, which also ship with the Snapdragon 600. 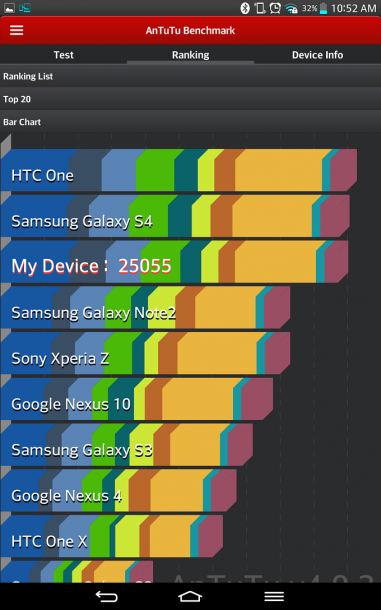 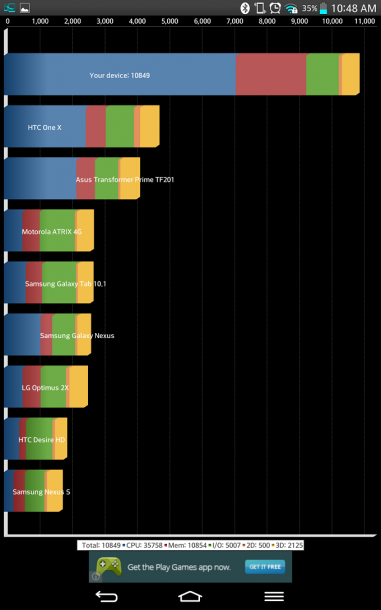 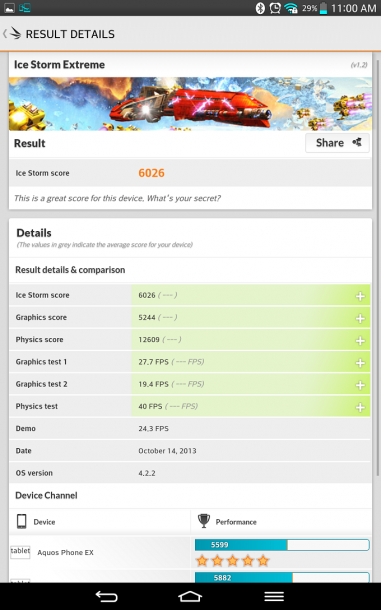 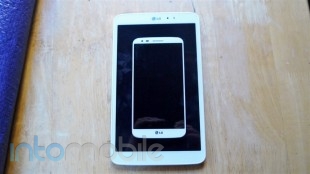 Both the top and bottom portions of the tablet are done up in a matte plastic that gives off a slight iridescence, but the backside largely consists of aluminum. The cold touch of the metal when holding the G Pad gives off a very premium feel, and we like it a lot.

If you have the LG G2 as your smartphone, you'll see that the two devices are definitely cut from the same digital cloth.

Overall, the design of the G Pad 8.3 is rather beautiful and consists of build materials that will make you want to have it in your hands all the time. It begs to be held.

The G Pad shares the same software found on the LG G2, which comes as no surprise. LG's custom user interface offers a unique experience that's not overdone, but hardly stock Android. 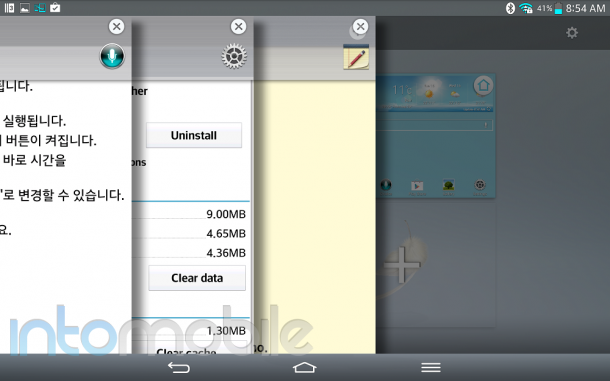 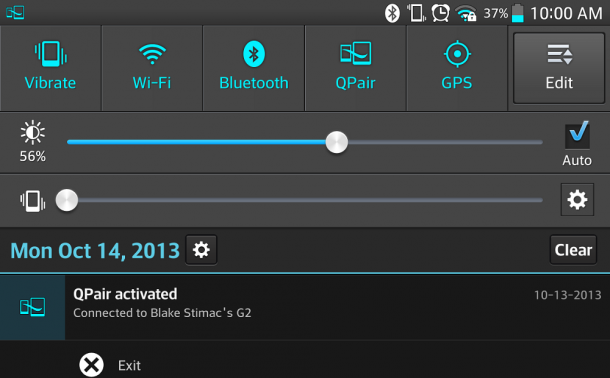 Possibly one of the best features found on the G Pad is QPair. The application allows you to pair your smartphone with the tablet, allowing you to send and receive texts, and receive call notifications from the tablet, allowing you to dismiss them. The feature worked seamlessly when paired to the G2, but QPair luckily works with other smartphones running Android Jelly Bean and up. We also tested QPair with the Nexus 4 with no issues at all.

For a more in-depth look at some of the software features you'll find on the G Pad 8.3, be sure to check out our LG G2 review right here! 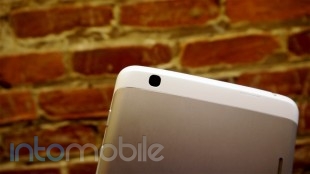 Adding cameras to tablets is essentially just a courtesy to the customer and are largely an afterthought. Not only is it awkward to hold a tablet up to take a photo, but you'll also look pretty silly in the process. Still, we're glad to see that LG didn't leave cameras out of the G Pad.

The five megapixel camera on the G Pad is pretty much what you'd expect. In good lighting conditions, it can produce a decent shot, but ultimately suffers from grainy-looking shots and some photos turn out a bit washed out in less than perfect conditions. Nonetheless, the camera on the G Pad performs just like a majority of cameras on tablets.

The camera software offers a wealth of options to make your photos look the best. You can tweak the white balance, color tone, ISO, focus mode, and more within the settings and there's a nice helping of preset shooting modes to choose from. 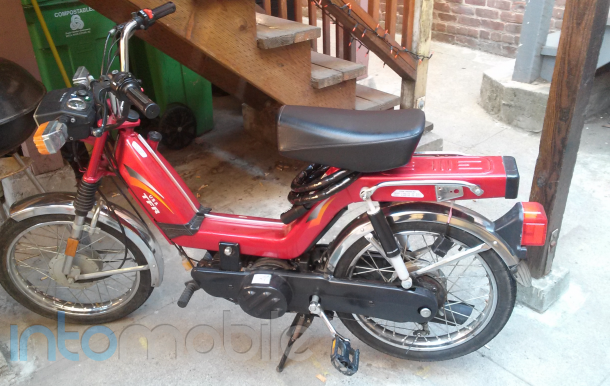 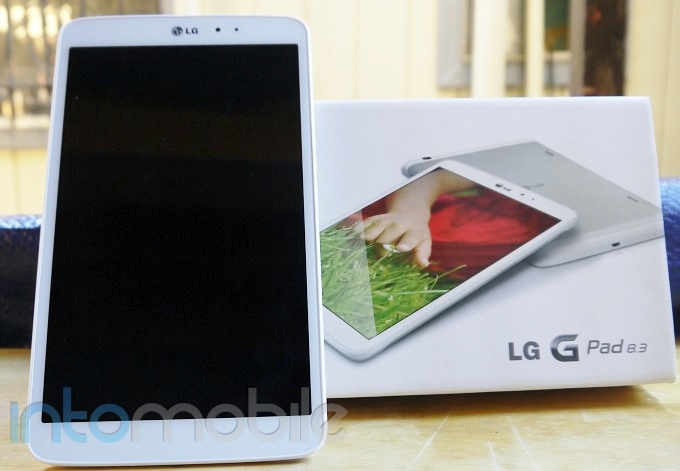 The LG G Pad has a lot going for it. It's ultra sleek, feels great in the hands, and has a great spec list to top it off. It's pretty easy to see that LG had thought long and hard about what it was going to put into its tablet before jumping back in, and that decision has paid off nicely.

LG nailed all of the most important aspects of what makes a tablet great. It ships with a snappy processor, stunning display, and great build quality and design. It may lack features like NFC, but we still can't see this being a dealbreaker.

The LG G Pad 8.3 will easily one of the best Android tablets around when it's made available (it launches today in Korea). Whether or not it will sway you from grabbing something you already had your mind set on is up for question, but this is a tablet that shouldn't be dismissed. LG is on a roll with it's latest product lineup. The G2 is one of the most solid phones that money can buy right now and the G Pad is its perfect companion.