It’s never easy to say some device is the best you’ve ever used, but the LG Optimus G Pro is one of those phones (phablets). If you can handle its size, you’ll want one. It has all of the latest goodies you can possibly imagine, including QSlide multi-tasking, Miracast support, LTE connectivity, powerful camera, full HD screen, and so on and on. Best of all, its customization options are pretty much limitless, making it one of the top choices for geeks all around the world, presuming they can get one. As I’m writing this, the Pro is only available in South Korea though we expect it to hit other markets in the near future. Let’s dig into details, shall we?

As I said it, this is one of the best phones on the market with top-notch specs that include Qualcomm's APQ8064T Snapdragon 600 chipset with 1.7GHz 300 processor, 2GB of RAM, dual-cameras both of which can record video at 1080p, wired or wireless TV out, powerful 3140mAh battery, 32GB of built-in storage, and a microSD expansion slot if all of those gigs are not "good enough" for you. A stylus doesn't come as part of the package, though.

Here are the Optimus G Pro specs at a glance: 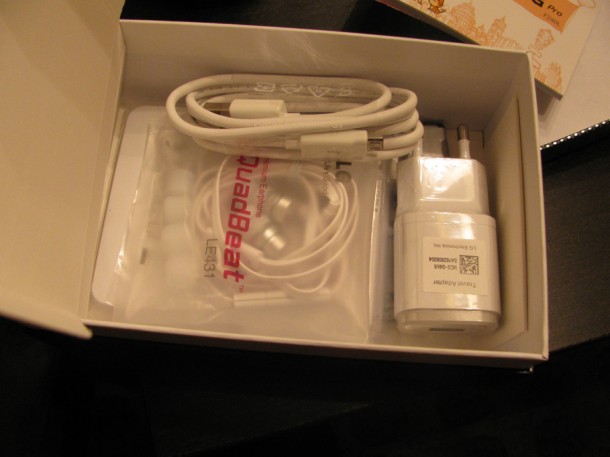 Also worth mentioning is that inside the box you get a phone dock that also doubles as a 1.8A battery charger, standard microUSB charger, headphones and a spare battery. While the charger is cool, it can't charge the additional battery and phone at the same time. Guess something's gotta give.

The front of the Pro is dominated by a big-ass screen, on top of which we find a front-facing camera, sensors (proximity + ambient light) and LG's logo. Below the screen, there is a physical home button, surrounded by capacitive back and menu keys. The home button leaves room for improvement but it does come with a nice touch as it also serves as a notification light. Nice way to leave room for other things that matter. 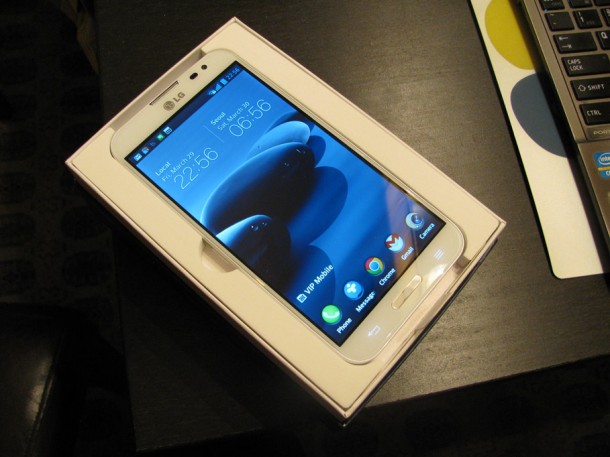 Customizable QButton key and volume rockers are on one side of the phone, while the other side only has a lock button. The top of the phone is reserved for a 3.5mm headphone jack, infrared blaster and second microphone which is used for clearing the background noise; and on the bottom there's just a microUSB port.

Lastly, on the phone's back, you'll find a camera with LED flash, speaker, LG and your mobile operator's logo. The device we were able to test boasts LG U+ logo, located just below the camera.

Similarly to many other smartphones on the market -- though unlike the HTC One and Apple iPhone -- the LG Optimus G Pro is made out of plastic. That, however, isn't bad as it sounds as we were able to attest after accidentally dropping it a few times. The phone was barely scratched and everything worked like nothing had happened. Of course, we weren't actually making the Pro suffer much... we'll let others test that part.

All in all, I would say LG's phablet is on par with the Galaxy Note II's built quality and because it's slightly easier to hold, it will last longer (as you will be dropping it less often). 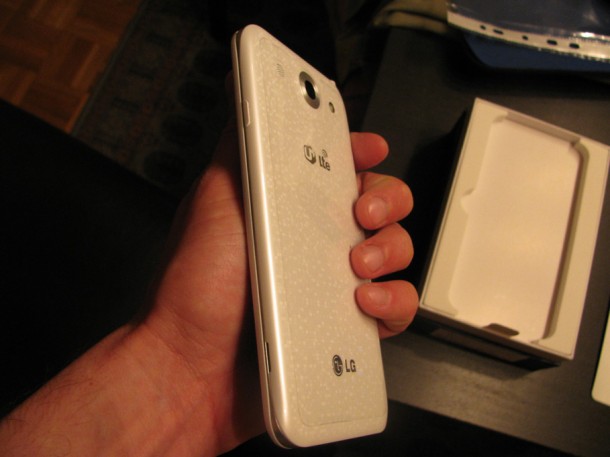 Just like that was the case with many other LG smartphones, the Optimus G Pro also runs the company's own UI on top of the Android core. While I know some folks who prefer HTC's Sense UI, I've found LG's Optimus UI a slightly more compelling. To be fair, it is "heavier" than HTC's software but it comes with so many customization options to allow you to fine-tune it to your specific needs.

The unit we've got also came with a ton of preloaded U+ apps, some of which were impossible to delete. To solve this "problem," we placed them all in one folder that will never be opened.

The main trick this phablet packs is called Q Slide. It's LG's way of Samsung's Multi Window multi-tasking and it rocks. Not only can you run few apps at the same time, but you can also adjust the transparency level of those app windows and resize them as you fancy. The end-result is pretty impressive, enabling you to see multiple things/apps at once.

Other apps preloaded on the Pro worth noting include mobile office suite Polaris Office 4, SmartShare (which lets you beam images and videos between different DLNA-certified devices) and the note-taking app QuickMemo.

Finally, let's not forget Wise screen, which is LG's version of Sammy's Smart Stay. Or that's the other way round since LG claims it was the first to file for eye-tracking patents. In any case, this handy feature relies on the front-facing camera to keep the screen turned on while you're looking at it.

The LG Optimus G Pro comes preloaded with both the "default" Android browser and Google Chrome. We love Chrome more, but we were also playing with the other browser. The reason is obvious - it's a QSlide-enabled app that can double as a mini app, floating above other running applications. Once in this mode, you can't switch between tabs but you can quickly return back to the regular browser if you fancy so.

As for the Chrome, it remains one of our top choices for loading JavaScript-intensive websites... the other being Dolphin Browser.

As you would imagine, the Optimus G Pro is a multimedia power-house, not least thank to the built-in Qualcomm Snapdragon 600 SoC that combines quad-core 1.7GHz Krait 300 CPU and Andreno 320 GPU. You can both record and play video files in 1080p full HD, and even watch them in a popup window relying on the Q Slide software. Just like other such popup windows, you can adjust its transparency.

The Pro we got to test comes with T-DMB support, making sure Koreans can watch TV while on the go. Then there's Miracast so you can beam video to compatible TV sets sans any wires, DLNA and MHL-enabled microUSB port. 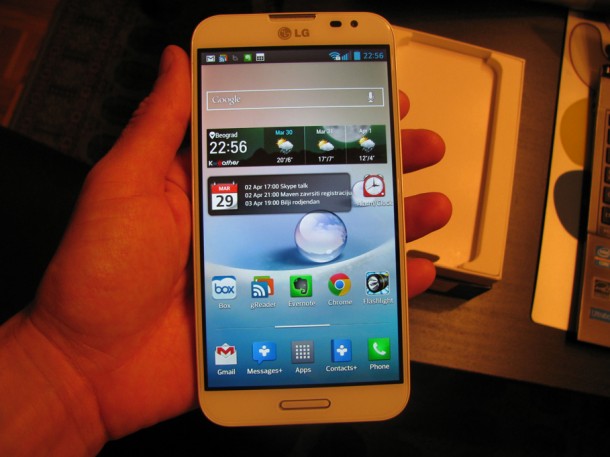 There is a pair of cameras found on LG's phablet, both of which can record 1080p full HD video. The front-facing camera has a 2.1-megapixel sensor while the one on the back rocks a 13-megapixel sensor and a LED flash. Additionally, there's a powerful software with a ton of features that allows you to make that perfect shot.

The rear camera comes with a 15x digital zoom, geotagging, timer, 5 white balances, 4 color effects, 5 ISO options ranging from 100 to 800, 6 scene modes, 3 focuses, voice activated shutter and time-machine options. Plus, let's not forget 6 shooting modes, including HDR, panorama, beauty shot and VR panorama. The last mentioned is especially interesting as it enables taking Photo Sphere photos by moving the phone around the central photo to fill out as much of the sphere as you want. Pretty powerful stuff though we must add that it took us a couple of bad photos to make a decent looking sphere.

When it comes to video recording, you can choose between 5 video sizes, and adjust such options as anti-shaking, brightness meter, white balances and colors. Moreover, there are 4 shooting modes, including the super-cool dual-recording that allows you to record with two cameras at once. While you may be wondering what's the point on this, we can easily envision this capability being used by teachers of tomorrow where they can both show us the object of the lesson alongside their face. And besides, the soon-to-be-launched Galaxy S4 also supports this capability. 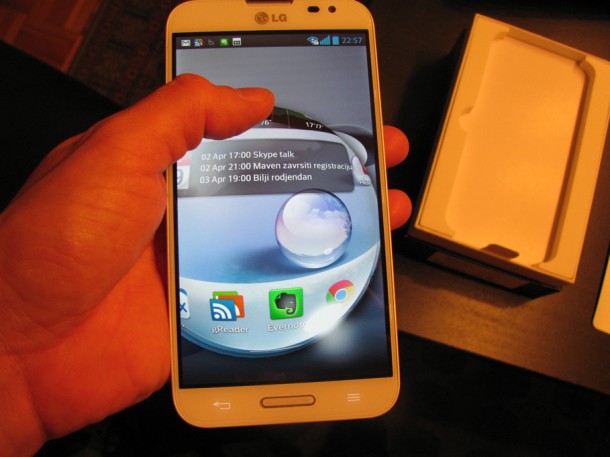 We were perfectly happy with the way LG Optimus G Pro managed to hold on to signal even in places where we thought the connection will break. That said, we haven't really pushed the limits as we live and go around generally well covered areas. The voice quality is on par with other high-end phones we've used and not a single person told us they didn't hear us properly. Guess we have that other microphone and the built-in software to thank for clearing all the background noise and delivering crystal-clear sound.

As for the battery life, we managed to get through the day on a single charge. That large screen obviously comes with a caveat but the included 3,140mAh battery provided enough energy to keep us online even after watching a couple of YouTube clips and browsing the web like it's nobody's business. Best of all, the other battery (included in the box) is always waiting at home so you never miss a beat.

There is one big downside to the LG Optimus G Pro - the chances are you can't buy one. As I'm writing this, it's only available in South Korea.

We're sure LG is pitching carriers as we speak and can only hope the launch is imminent. Yes, this is the best phablet we've ever used! If you're on a market looking for such a device, the Optimus G Pro is your best option - it's much better purchase than the Galaxy Note II, rocking a faster processor, better camera and full HD screen. Hopefully, it will hit major carriers' offerings in the next few weeks when you will be able to come to the same conclusion as we did. ;)