It’s easy to assume that you need to drop at least $200 for a decent smartphone these days, which is the standard price point for high-end devices. That said, sometimes a device comes along that brings in some top-notch features at a more attractive price point, without sacrificing too many specifications. Motorola looks to have done just this with the new Atrix HD, which is the third iteration of the handset for AT&T. With a familiar design and materials we’ve seen in other Motorola handsets, the Atrix HD may not seem so special, but it packs a punch with a powerful processor and HD display. But can AT&T’s new Motorola handset roll with the likes of the HTC One X and Samsung Galaxy S III? You’ll just have to read and find out.

The Atrix HD is Motorola's latest AT&T-branded handset, and a lot has changed since the Atrix 2. Packing a punch with a 4.5 inch 720p HD display and 1.5GHz dual-core Snapdragon processor, these two features alone are bound to get the handset some attention. But its when you hear the handset itself is only $99 on a new contract that things get a bit more interesting.

You won't find anything on the bottom of the device, but there's something to be found on every other side. Since the battery of the Atrix is non-removable, Motorola decided to give users access to the SIM card and MicroSD card slot on the bottom left side of the handset. It might not be the prettiest of implementations, but it works nonetheless. The right side houses the power/lock switch and the volume rocker, which are very thin and decked out in silver. Up at the top, the Atrix looks a bit busy with the 3.5mm headphone jack, micro USB port and micro HDMI port. Like the Droid RAZR, the back of the Atrix HD has a hump at the top, and this is where you'll find the 8 megapixel camera, LED flash, and speaker grill. 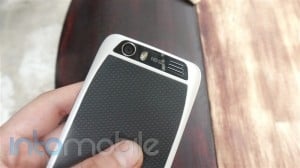 Most of the back panel is cover in Kevlar. The woven material is smooth to the touch but can take a beating. Motorola's use of Kevlar on its phones is nothing new, but we're not complaining. The combination of Kevlar and Corning Gorilla Glass covering the large HD ColorBoost display, the Atrix HD was definitely built to be an incredible durable handset. The display on the Atrix HD is nice, bright, and crisp.

Given it's price point, you have to expect that Motorola needed to cut some corners when making the Atrix HD, and this may be the reason that the handset lacks NFC. Sure, NFC in the US may barely be scratching the surface, but we could imagine that it will become more prevalent in the next two years. In its current state, NFC isn't a must-have feature, but Android Beam is definitely a fun way to share content to others. 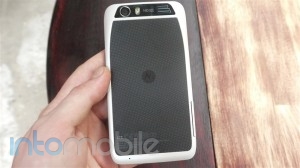 The Atrix HD is an interesting device at first glance. The face of the device is black, like most handsets, with the surrounding casing all white. The border almost gives off an iridescent look, and its going to come down to personal preference as to whether you like it or not. In the middle of the white casing, a black strip lines the perimeter. Aesthetically, it may seem a bit busy, but it's done in a (somewhat) tasteful way. That said, the stark contrast of black and white almost gives the Atrix HD a toy-like look to it. That said, some may like it.

So far the in-hand feel of the Atrix HD, while solid, isn't terribly comfortable. When you're dealing with large screens like this it's not surprising, but like the HTC One X, the display feels a bit wide in the hand. Even with a larger display, something like the Galaxy S III alleviates this somewhat by making the display taller instead of wider and making the edges of the device more curved. Of course, Motorola's  rarely treads on the smooth line when it comes to its design aesthetic.

The combination of Corning Gorilla Glass on the front and Kevlar on the back make the Atrix HD one of the most solid devices we've come across. 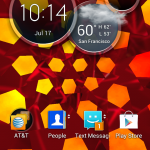 After many attempts to provide a decent user experience, Motorola still misses the mark with Motoblur. Whether they want to ignore that name completely or not, this is still the software that has been viewed with scorn since it debuted on devices like the BackFlip. That said, Moto's custom UI is significantly different than previous iterations and while it may lack the sexiness of Sense or usability of TouchWiz, it's more usable than ever.

Probably one of the best things about the software on the Atrix HD is how much Motorola allowed Ice Cream Sandwich to shine through. Multitasking, adding widgets, and the application drawer are nearly identical to what you'd find on stock Android 4.0, with the exception of the reskinned icons found throughout.

Outside of the expected bloatware from AT&T and Motorola, the software experience on the Atrix HD is definitely usable - in a way that we haven't seen on a Motorola device in a while. Its bells and whistles may be a little underwhelming if you're coming from a Samsung or HTC device, but there are some interesting features Moto has packaged in its software. 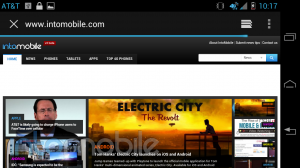 The web browser is a nice highlight on the Atrix HD, and that's only because it's essentially the stock Android 4.0 browser. Samsung and HTC have customized the default browser on their handsets to the point that it's less consistent with the rest of the Android UI, but Motorola kept it intact, which we're definitely happy to see.

You're not overloaded with useless settings, and closing tabs is done by swiping the away. Samsung and HTC's implementations require tapping on an X to close an open window, which isn't a deal breaker but we do wonder why they tweaked something that works better. 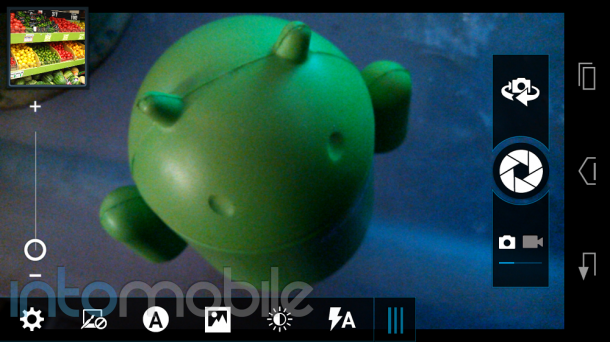 Like the original Atrix and the Atrix 2, the Atrix HD's camera is a sore spot. In perfect lighting, shadows can still pull a lot of graininess. That said, the Atrix is capable of some gems.

The poor quality sensor aside, one of our biggest gripes about the camera is the software. It lacks the the wealth of features found on TouchWiz and the simplicity of HTC's camera application. Like I said in the Atrix 2 review last November, the camera software looks like it hasn't escaped Android 1.6 Donut. 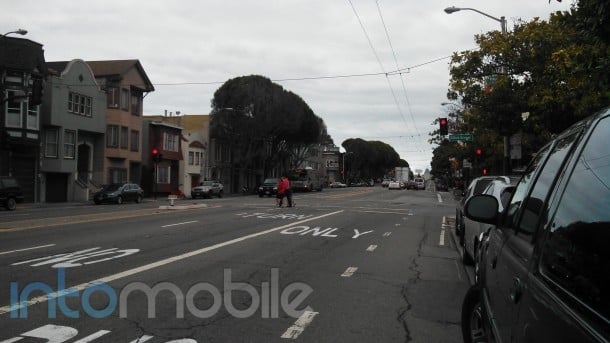 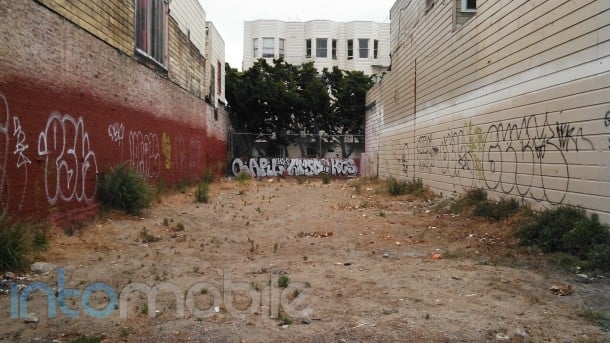 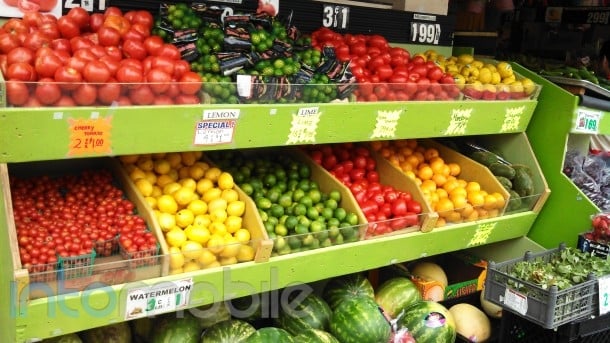 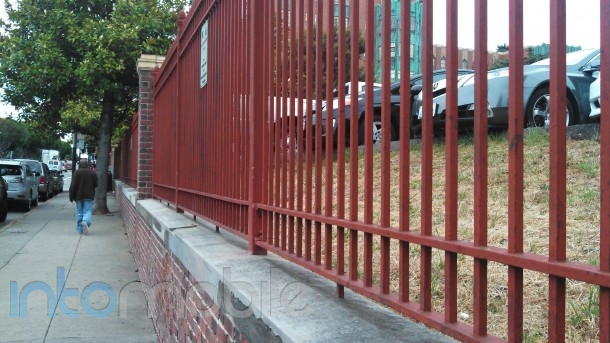 Call quality didn't seem to be much of an issue with the Atrix HD at all, but we wish we could say the same for the battery life. We know LTE can take a large hit to the battery life on a smartphone but the Atrix HD seemed a bit hit an miss. Some days the Atrix could almost squeeze out 8 hours of battery life, where other days it struggled to get out five hours.

Of course, your usage will likely vary depending on how you use your device. It might be nice that your phone has a thin profile, but it's not so nice when your handset is dead less than half way through the day. 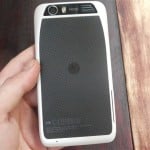 The Motorola Atrix HD is by far the best Atrix we've come across, and that's thanks to the nice display and very fast dual-core Qualcomm Snapdragon processor. However, the poor camera and lack of a select few features makes us love the handset a bit less. So where does that put the Atrix HD? Well, it's a bit of a toss up.

If you've been eyes something like the Galaxy S III, and want to save some money, you're going to have some buyer's remorse. It's a bit hard to genuinely categorize the Atrix HD, given that it has powerful innards at such a low price point, and it's still not in the same class you'll find Samsung and HTC offerings. That said, Motorola's handset is no chump with its great build quality and LTE support, and we think that many people will like the phone.

The Motorola Atrix HD may use a recycled design and lack any wow-ing feature, but that doesn't make us forget about the high-end specs it does have. Oh yeah, and the fact that it's half the price of most smartphones gives it enough room to shine on its own -- As long as you know what it is and isn't.