While we’ve seen a handful of Motorola Droid RAZR handsets in less than a year, the RAZR M might be the most interesting, even if it’s not the most powerful of the bunch. Rocking a modern set of specs for the mid-range level, the RAZR M’s eye-catching feature is it that it’s one of the smallest bezel’s we’ve ever seen surround a smartphone’s display. But is that enough to make the RAZR M your next phone, or is it a neat feature on an otherwise drab handset? Read on to find out!

The Droid RAZR M is both interesting and underwhelming at the same time. The design, while slightly tweaked, is pretty much what you'd expect to see in a handset with the RAZR name, but it's hard not to like.

4.3 inch displays seem to be quite the sweet spot for smartphones, as they fit nicely in the hand without taking too much space. The exceptionally thin also lends to the great in-hand feel. It's thin, but not too thin, which is a great thing. The 7.7mm on the original RAZR was simply uncomfortable in the hand and this was mainly due to the wideness of the display. This is not an issue at all with the RAZR M, and the size feels just right in the hand.

The real selling point of the RAZR M is obviously the micro-bezel it's rocking. Unfortunately, the display itself leaves a lot to be desired. The qHD Super AMOLED Advanced pentile display is that last thing you really want to show off when the bezel is so small, as you'll see pixels everywhere - across the board.  It's fine for what it is, but Motorola missed the mark in the display arena. Still, the display tech in the handset might be a non-issue for some.

As you'd expect, the RAZR M's face is rather clean. Above the display, you'll find a LED Notification light, Motorola's logo, as well as the front facing camera and the standard assortment of proximity and ambient light sensors. Below the screen is where you'll find one of the two Verizon logos, with a microphone below for calls. The left side of the device houses the microUSB port and a small tab that hides the SIM card slot and microSD card slot. The right side of the device is where you'll find both the power/lock button and volume rocker, which can make it a bit cumbersome to take screenshots. The top houses the 3.5mm headphone jack and the bottom side is clean.

The back of the RAZR M is your standard affair as well. You'll find the Kevlar backing that is nice and sturdy, but slowly losing its novelty with every new RAZR iteration, as well as the 8 megapixel camera and speaker grill here. 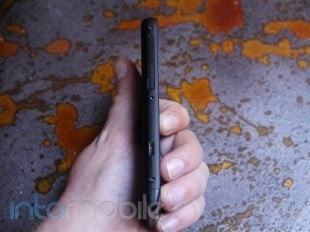 With the exception of how small Motorola managed to make the bezel on this device, the design isn't terribly different from other RAZR handsets. Still, if you like the industrial look of the RAZR series, you'll no doubt like the RAZR M.

Like with most of the RAZR handsets we've seen before, the RAZR M starts out thicker at the top and slightly tapers when you get to the bottom. The Kevlar back panel does little to impress us anymore, but it's still as sturdy as you'd expect it to be, and has become a staple material in many Motorola devices. 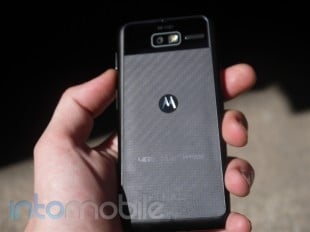 What's probably the least surprising thing about the RAZR M is its build quality, and that's a good thing. Motorola has long been making its handsets  as sturdy as  possible, and you'll find that same effort in the RAZR M. The handset feels about as solid as any handset could be these days, and that's thanks to its size and build materials. The use of metals and Kevlar give it a strong in-hand feel, and we wouldn't expect anything less from Moto.

The RAZR M should satisfy the needs of just about anyone who handles it. We may have some more powerful devices available at the moment, but it's hard to beat the innards of the M since it's only $99 on a new contract.

The RAZR M will offer up a 1.5 GHz dual-core Snapdragon S4 processor, 1GB of RAM, and all the goodies you'd want in a handset of this price range. In reality, you're getting a pretty damn powerful phone for $100. 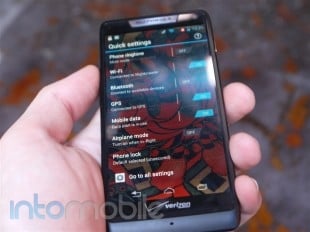 Motorola has seriously stepped up its come in a couple areas with its software. It's essentially the same UI you'll find on the likes of the Atrix HD  and some of the other new Moto handsets. Still, there are a couple of tweaks found in the RAZR M that will likely be making their way to more handsets that we like a lot.

We've seen LG and Samsung bring quick settings toggles to the notification panel on their own Android handsets, but Motorola has taken a different approach. But to understand how said toggles are implemented, you need to know about how the new "Not-MotoBlur's" home screens work. Instead of having the middle panel as your main homescreen panel, Motorola's UI panels go from left to right. When you tap the home button, you'll be brought back to the first panel all the way on the left.

So what does this have to do with a quick settings menu at all?  Well, from the main home screen, all you need to do is swipe once to the left to get a rather large assortment of settings toggles. This is a bit easier to do than reaching all the way at the top to drag down the notification window, but you do need to be on the main panel to access the quick settings, so there's a give and take between both methods. Nonetheless, it's implemented well enough to be helpful, which is all we've been asking for from Motorola.

Other than some minor UI changes, the software on the RAZR M is pretty much the standard experience you've seen on most Motorola handsets as of late, and that's not a bad thing at all. Motorola's custom UI is so much better than what it used to be, and now comes with some truly useful features. 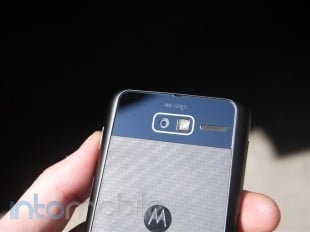 The camera on Motorola phones have usually been a miss for whatever reason, and while the shooter on the RAZR M isn't nearly as bad as some previous handsets, it still falls a bit short.

Gone is the massive amount of graininess that had plagued devices like the first two Atrix handsets, but the RAZR M still has some issues with low-light shots. Many photos come out significantly darker than you'd expect them to be, even if the environment isn't all that dark. That said, with great lighting, the RAZR M can take some gems.

The camera software remains the same as what you'd find on something like the Atrix HD, and it's nothing to write home about. It brings most of the main features to the forefront, but lacks the style you'll find on competing devices. 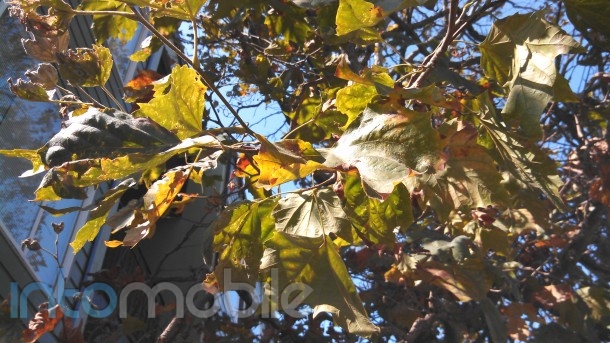 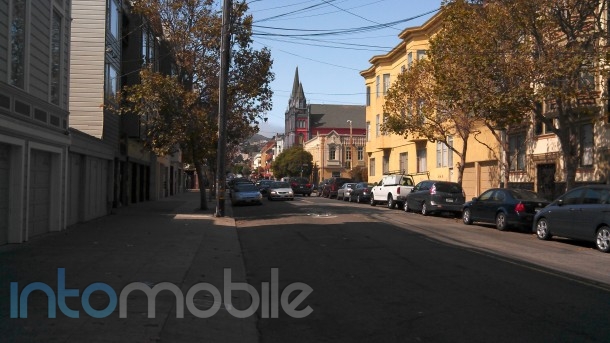 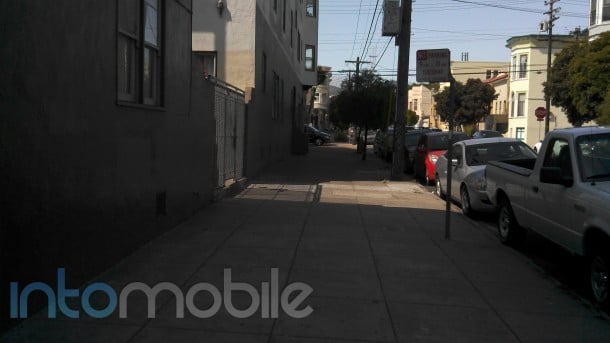 As you'd expect on most Verizon handsets, call quality was pretty good. I experienced no dropped calls nor interference while using the phone on either side.

Battery life is acceptable with the RAZR M. It may lack the 3300 mAh battery on the RAZR MAXX, but the 2000 mAh battery does its best to keep up. And it does so accordingly. I managed to get through a day with the RAZR M with moderate usage, but as per usual, results will vary. LTE has come a long way when it comes to battery life, but expect to take a hit . 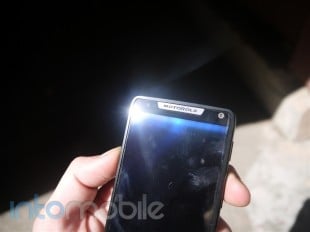 There's a lot to like about the RAZR M, even if it doesn't look much different from other RAZR handsets at first glance. The RAZR M has a lot going for it and the fact that it's only $100 will easily be enough to satisfy potential buyers.

We've been waiting for an edge-to-edge display from Apple, Samsung, HTC, --- anyone - and it was Motorola who brought it to the table. It may not be a bezeless device, but the RAZR M's is thin enough to keep you interested, and that it does. We do wish the display tech was a bit better, but it's just a minor complaint when you consider the price and the solid in-hand feel of the handset.

The Droid RAZR M might not sway you from something like the Galaxy S III or HTC One X, but its still a nice looking phone with a powerful set of specs. If you've been looking into the RAZR series for your next smartphone purchase, be sure to direct you attention to the RAZR M. Until the RAZR MAXX HD comes out, at least.