The BlackBerry Curve 9360 is the latest in RIM’s blitz of OS 7 devices to launch this summer, which included the Bold 9900 / 30, the Torch 9810, and the Torch 9850 / 60. The new Curve keeps with the established entry-level brand identity, but takes some pretty significant departures in design while enjoying a few bumps up in specifications.

In my initial hands-on, I was really impressed with how compact the phone was, but slimness was a feature of many of the new BlackBerry handsets, often at the cost of battery life. Would the Curve 9360 be any different, and if so, is the sacrifice worth it? The T-Mobile version is coming out soon, and you might want to know the answer before picking one up.

The BlackBerry Curve 9360 is a slight phone, only 11 mm thick, versus the old Curve 3G that was 14 mm. Despite shaving off a lot bulk, it's still just as tall, but still feels great in the hand, and slips into the pocket very easily. Under the hood, the specs are a bump up from the old Curve, about on par with the old top-of-the-line handsets (like the 9800 and 9780), and a solid notch below the best BlackBerry devices that are coming out now.

It's worth noting that the BlackBerry Curve 9360 doesn't have a touchscreen, which is something of an anomaly in the smartphone space at this point. If you're still indoctrinated by the older BlackBerry lifestyle, it'll just seem like business as usual, but if you've used Android, iPhone, or any other major smartphone platform full-time, you'll likely end up helplessly prodding the Curve 9360's screen to no effect for at least the first week.

The design is definitely the most striking quality of the BlackBerry Curve 9360. The wedge-shaped edges make the whole package a slim, pocketable sliver of a phone. Despite its proportions, the keyboard and screen are both big enough to be practical, if not luxurious. The new side convenience key design pares the surface area down to a slim, raised line. The same style is used by the Torch 9850 / 60, and incorporated a move of the mute/pause/play key between the two volume keys. The only real unique layout change is the 3.5mm headphone jack from the side to the top of the phone next to the lock key. While I found that positioning a little more awkward when listening to music at my desk, it did make for a better fit in the pocket.

In terms of sheer looks, the Curve does extremely well; the navigation keys are seamless with the front screen, like its 9300 predecessor. The slim profile adds a lot of class, and is my favourite thing about the 9360. Though the chrome border and polished battery door look good, they probably won't age gracefully after normal wear and tear. 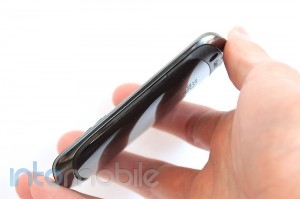 There are very few moving parts in the BlackBerry Curve 9360 to worry about. The side convenience keys barely leave the main body, and the navigation keys are all a part of the main screen. The keyboard feels great, and like many a BlackBerry before it, will likely be able to faithfully handle several years of e-mail-writing. Under dark circumstances, the keyboard is backlit, which is always a nice touch.

The display did suffer a ding after a little over a week of daily use, and there was a speck of dust caught between the LCD display and the outer plastic casing; this is a problem the old 8300 Curve series had due to gaps in sealing, and over time can create an impressive accumulation of dust obscuring the display. Usually, carriers will hook you up with a replacement if the problem's bad and you're within warranty, just be mindful that it's a possibility.

Though the camera now enjoys an LED flash, and the 5 megapixel sensor is a solid step up from the 2 megapixel unit in the old 9300, it's still fixed focus (meaning poor close-up photos like the 9900). Video shooting is at 640 x 480, which is a step down from what we're seeing in the higher-end BlackBerry devices, but still passable for casual stuff you're just sharing on Facebook.  In terms of colour quality, some shots turned out a bit warmer than I would have liked, but overall, I was happy with the amount of detail it captured.

The camera app on BlackBerry has a variety of scene modes to best capture the moment, including party, landscape, portrait, and others. There aren't a lot of granulated controls like you might see on Android for brightness, contrast, and exposure, but for casual point-and-shoot situations, I find I rarely have the time to fiddle with that stuff anyway. Various social network plug-ins make it easy to share shots from the native camera app. 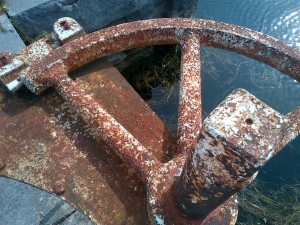 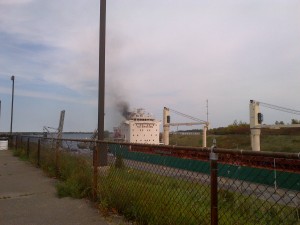 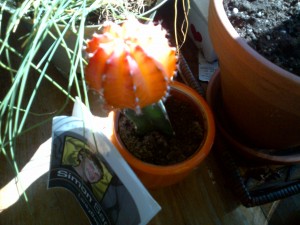 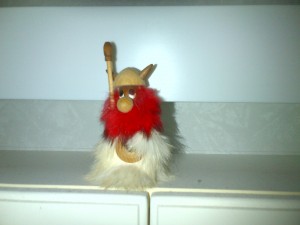 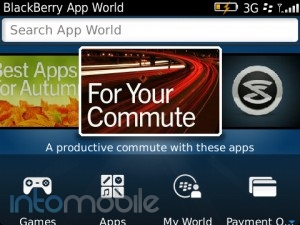 The BlackBerry Curve 9360 is loaded up with OS 7, which is a modest update on last year's OS, which was, in turn, a modest update on the software before it. All-in-all, you'll find the same spartan, menu-based user interface, with a few new twists like voice-activated universal search, and carousel-style home screens, but fancier stuff like augmented reality isn't supported. The BlackBerry's strong suit is providing fast, efficient e-mail, instant messages, and social network updates by conglomerating them within your Messages and Contacts application.

The application selection sits at about 40,000 through BlackBerry App World, which isn't a lot compared to Android and iPhone, but big enough to attract major developers like Foursquare, EA, and Pandora. RIM tends to do the heavy development lifting for some of the bigger names, like Google Talk and Facebook, and does some pretty cool apps of their own, like Protect for remote security, and Traffic for routing based on real-time conditions.

An often-overlooked feature of BlackBerry is its support for themes, which are downloaded just like apps, but can drastically change the way your home screen looks and behaves. Themes can also affect font colour and size, lock screen, and a bunch of other stuff. It's not quite the same degree of personalization offered by widgets in Android, but's certainly nothing to sneeze at.

The near-field communications feature was active on my Rogers unit, but that's something that can easily be locked out by carriers. It's not a huge deal, since there aren't any serious mobile payment functions akin to Google Wallet in place, but at least NFC is there waiting to be taken advantage of.

As for overall performance, I've found that there are still some of the familiar hang-ups when going about day-to-day operation. They aren't as bad as on older BlackBerry devices running on a 624 MHz processor, but the 800 MHz unit still can't seem to quite handle everything with perfect smoothness. Performance hiccups like this are expected given the entry-level nature of the Curve 9360, but it's still frustrating to still have to deal with the same kind of problems as several years ago.

The WebKit browser on the BlackBerry Curve 9360 does a passable job of rendering pages, but the limited screen real estate and lack of touch input cramp the whole experience. There's no Flash support either, but on a screen that small, watching streaming video is a bit of a lost cause anyway. Still, the browser supports tabs, and the new OS 7 rendering engine helps the BlackBerry browser score highly on JavaScript, CSS, and HTML benchmarks. 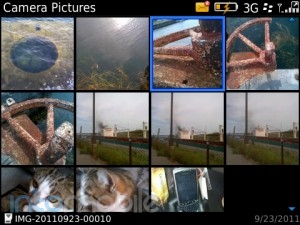 The music player has changed very little from previous generations; it's built into universal search, so you can jump to a track just by typing its name in from the home screen, but I'd still like to see separate look-ups for artist and album. The repositioned 3.5mm  headphone jack is actually great when the BlackBerry Curve 9360 is slipped into a pocket, but it's a bit awkward when you're sitting at a desk; you either have to have it upside-down to have the jack facing you, or you have to deal with brushing the wire out of the way while checking e-mail. I love the new media keys on the side, though. They're ever-so-slightly raised from the main body, but sharp enough to feel distinct when fiddling around blindly. Putting the mute/pause/play key between the volume/track control keys was smart, and makes really good sense.

Watching video on the small-ish 2.4-inch screen wasn't ideal, but the HVGA display was sharp enough to show clips and stills with a reasonable amount of sharpness. The display is certainly a big step up from the 320 x 240 the old Curve was sporting.

The BlackBerry Curve 9360 is packing a 1000 mAh battery, which is really, really teeny. Given, the screen and processor aren't burning as hot as the higher-end BlackBerry devices launched over the summer, it's still not a lot to run on. I had trouble getting through a full day on a single charge, with the phone often dying by mid-evening. Of the new batch of devices, I found the Curve lasted longer than the Torch 9850 / 60 and Bold 9900, but not quite as well as the 9810. RIM claims 5.5 hours of talk time, and 14.5 days of standby.

Phone quality was passable on Rogers; only one call was hard to make out, and none of them dropped.

As RIM's new baseline standard, entry-level phone, the Curve 9360 offers a fair bit, and has enough slimness to keep the style-oriented interested. Unfortunately, a lot of the issues that plague RIM's top-of-the-line OS 7 handsets, like an uncertain future for apps, dated user interface, and sub-par battery performance are all recreated in the Curve 9360. QNX phones are just around the corner, so any shoppers that have a few more months worth of patience for BlackBerry may be rewarded with something mind-blowing. Considering the slow progress on the PlayBook's operating system, that seems unlikely, but you never know.

As always, BlackBerry excels in messaging, be it e-mail, social networking, instant messaging or otherwise, but if you need anything more than that, be it in the way of apps, battery life, camera quality, or screen size, there are plenty of more palatable options at the entry-level. RIM has also announced the Curve 9370, which will have some extra RAM to help get over those performance hiccups, but no carriers have announced just yet.  If you're already sold on that form factor, and aren't tempted by Android or iPhone, at least hold out for that one. 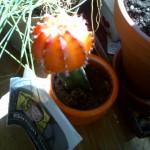 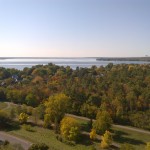 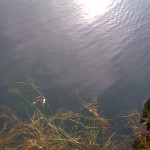 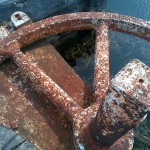 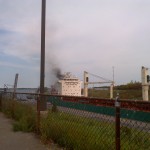 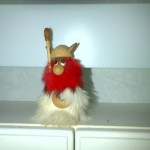 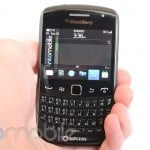 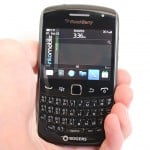 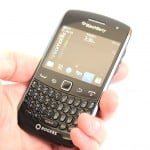 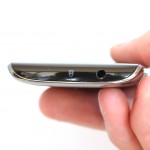 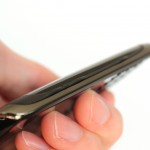 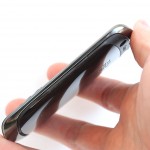 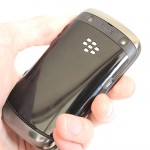 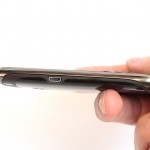 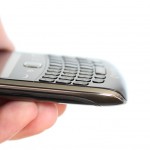 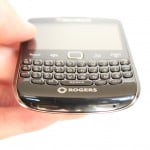 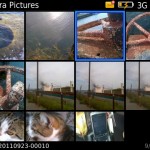 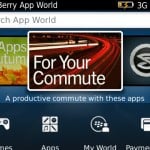 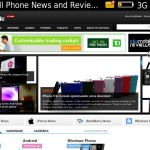