Sprint launched the Galaxy S III this summer and the handset is widely regarded as one of the best Android phones available from the carrier. We’ve already taken a look at other versions of the Samsung Galaxy S III, and in this review, we are going to take a quick look at the Sprint version.

We will explore how it compares to other handsets on the carrier, as well as point out the features that set this Galaxy S III apart from the other US models. Read on to find out whether the Sprint Samsung Galaxy S III should take top spot in Sprint’s handset lineup.

Under the hood, the Samsung Galaxy S III from Sprint is the same as the other US models. It ships with a dual-core 1.5GHz processor and 2GB of RAM, which compensates for the missing quad-core processor that is found in the international version of the handset. The S III also has 16GB of internal storage and microSD expansion up to 64GB.

The most striking feature of the phone is the 4.8-inch Super AMOLED display with 1280x720 resolution. You can't help but be impressed by the beautiful screen when you boot up the phone for the first time. The S III is one of a few phones on Sprint that'll work with the carrier's up and coming 4G LTE network. Other connectivity options include Bluetooth 4.0 and WiFi 802.11 b/g/n.

The rear-facing camera is also an impressive 8-megapixel shooter with 1080P HD video capture, while the front-facing camera boasts of 1.9-megapixels with 720P capture. The handset is a robust 5.4” x 2.8” x 0.3” and weighs in at 4.7 ounces. Rounding out the specs is a hefty 2100 mAh battery that promises up to 15 hours talk time or 200 hours of standby. 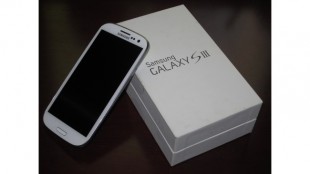 For a large phone, the Galaxy S III is well-designed. It has a big screen, but its small bezel and thin profile make the handset comfortable to hold. It's very similar to the Galaxy Nexus, just a bit longer and a tad thinner. It's weighted nicely for your hand, but, when you're holding it, you can't escape the lightweight, plasticky feel. Once you throw a case on it, though, that plasticky feel disappears and all you see is that gorgeous screen.

There is no getting around it -- the S III is an oversized phone. Unless you have the hands of a basketball player, it requires you to hold it with two hands to do anything beyond the basic swipe navigation. Typing, tapping and other actions require you to steady the phone in one hand and interact with the other. For those who like LED notifications, the S III has a bright, multi-color LED in the upper left corner. 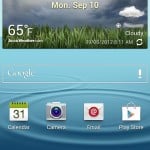 Software-wise, the Sprint Galaxy S III is a slightly different beast from the other US models. It ships with Android 4.0 Ice Cream Sandwich that's been customized with several Sprint apps, including Sprint Zone and the Sprint Mobile Hotspot app. Sprint also ships the device with Dropbox in a promotion that'll give you 50GB of additional storage for free. It's a great deal if you use Dropbox to backup or transfer files.

Sprint's Galaxy S III is the only US model to include Google Wallet. The Google-backed payment service lets you add reward cards and credit cards to an online payment account. Google Wallet uses the NFC chip in the phone and lets you make payments at stores that support the service. It's as easy as waking up your phones and swiping it at the checkout terminal. You can also find discount offers that are available in your area as well as view a history of your transactions.

Besides the Dropbox and Google Wallet, there are also several Samsung apps and other third-party apps like ChatON, Flipboard, Samsung Media hub, Samsung Music hub, Samsung Apps and Samsung's S-Apps (S Memo, S Voice and S Suggest). The rest of the S III is Android 4.0 ICS with Samsung's TouchWiz overlay. It has all the bells and whistles in the AT&T version of the handset. You can read about the many features of the S III in our original review of the S III handset.

The Galaxy S III is an LTE handset that's compatible with Sprint's newly launched 4G network. If you don't live in an area with LTE, the Sprint S III will fall back to the carrier's 3G network without any problems. I tested the phone on 3G and the data connection was very reliable. During my testing, I didn't experience any dropped calls or any other connectivity problems.

With normal use, the Galaxy S III performs very well for a smartphone of its caliber. It should definitely last you through the day, thanks to the 2100mAh battery inside. 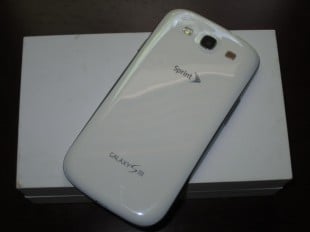 The Samsung Galaxy S III is an impressive phone. The screen is lovely and the phone is full of software features that'll make your head spin. The camera is great and rivals that of the iPhone 4S. From a hardware-only perspective, it is the best Android phone Sprint has to offer at this time.

It surpasses the Galaxy Nexus with a significantly better camera, improved battery life and 4G LTE connectivity. Its closest rivals are the Motorola Photon Q 4G LTE and the HTC EVO 4G LTE. The Galaxy SIII has a bigger screen, larger battery and more RAM than the Photon Q. The EVO 4G LTE rivals the S III in battery life, but it has an integrated battery that cannot be removed it. It also has 1GB of RAM, compared to the 2GB that's available in the S III.

On the software-side, the Galaxy S III is a fantastic. The average consumer will be happy with all the features Samsung managed to cram into its TouchWiz enhanced version of Android 4.0 ICS. Samsung hasn't announced a date, but rumors suggest the Android 4.1 Jelly Bean update should be available soon. If you don't want to wait, you can always install a custom ROM with Jelly Bean.

If you're not afraid of a big phone, then you can't go wrong with the Samsung Galaxy S III from Sprint. It's a solid handset with a great camera and the performance is top-notch. I wouldn't hesitate to recommend it to anyone who is comfortable with that size phone. If you're not sure about the size, then travel down to a Sprint store and check it out. You might be pleasantly surprised.