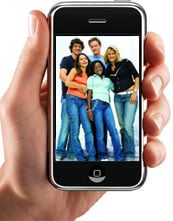 Though it’s still not available, most high school students are already aware of the Apple’s iPhone with a significant number saying they’re to buy it once become available.

Investment bank PiperJaffray conducted a study involving 500 high school students at 11 different institutions across the country, asking each about their interest and buying patterns in portable digital audio and online music.

The results discovered that nearly 85% of students saying they were already familiar with the iPhone, and of those students, 25% said they’d be willing to buy one for $500.

However, Gene Munster, senior analyst at PiperJaffray said he’s modeling for Apple to sell around 660,000 iPhones during the 2007 fiscal year ending September and just another 4 million next year.

Full release that includes the overall PMP numbers is available on AppleInsder.

We've missed this one. But here it is a few days later nevertheless. Verizon Wireless and Samsung recently announced the...