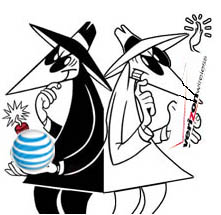 Verizon, like a vengeful rival, is planning to fight AT&T’s Apple iPhone release with their very own iPhone killer. Late this summer, as if trying to make up for the fact they turned down Steve Jobs and Apple as the first choice for iPhone exclusivity (they apparently didn’t like Apple’s demands for control of distribution, pricing, marketing, and more), Verizon is going to release their own “gotta-have-it” phone.

Verizon Wireless VP, Jim Grace, says that, “We said no [to the iPhone offer]. We have nothing bad to say about the Apple iPhone. We just couldn’t reach a deal that was mutually beneficial.” Grace says that Verizon has no regrets about turning down the iPhone, but “Time will tell” if they made the right decision. Denny Stigl, Verizon COO, hints that Verizon has the upper hand here, due to the iPhone being locked into Cingular’s inferior network for five years, adding, “The issue is not the Apple-ness of the iPhone itself, but with the cellular network that it is running on…That will be the true test of the iPhone: What will the iPhone experience be?”

Stigl told USA Today that the wireless operator doesn’t plan to sit back and watch the iPhone hype take over the industry – confirming that Verizon is working with a manufacturer to get an iPhone competitor to market soon. Stigl asserts that, “We do have a very good response in the mill,” and that, “You’ll see that from us in the late summer.”

We’re going to have a good time watching these two giants (AT&T and Verizon) battle it out over the summer!