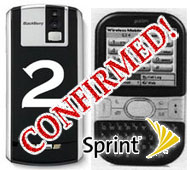 Gizmodo has gotten confirmation from Sprint’s insider that the carrier is preparing to launch the Palm Gandolf and BlackBerry Pearl 2 later this year.

Palm Gandolf, or as they call it “Gandolfini”, will retail for around $200, making it one of the most affordable smartphones on the market. Gandolf will target teenagers who text message frequently — in that sense, they describe it as “a [Treo] 700p that got in a nasty accident with a steamroller.”

On the other hand, Sprint is also set to roll out the next Pearl somewhere in September 2007. This baby promises to be even more appealing than its predecessor, and will pack an EV-DO as well as the support for Sprint’s mobile music store.

How much does this thing cost? Do you really have to ask? Vertu's Diamonds Signature collection was released in November...