In its effort to rule the mobile world, Yahoo is preparing to announce a new version of its Yahoo! Go suite of apps on Friday. Initially, the new version will target the U.S. users, while the test version will be available in 13 other countries including Canada, France, Germany, India, Indonesia, Italy, Malaysia, Philippines, Singapore, Spain, United Kingdom, Thailand and Vietnam.

The new version of Yahoo Go! will bring the following improvements: 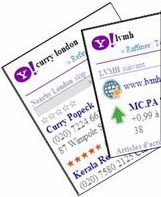 To boost its presence in Asia, the search giant will also announce pacts with six carriers on the continent to use Yahoo oneSearch Web-based search service as the default engine on their mobile portals. Mobile operators that signed a deal with Yahoo are Globe Telecom Inc. in the Philippines, Idea Cellular Ltd. in India, LG Telecom Co. Ltd. in Korea, Maxis Communications Berhad in Malaysia, PT Telekomunikasi Selular “Telkomsel” in Indonesia and Taiwan Mobile Co. Ltd. in Taiwan.

[Via: The Wall Street Journal]