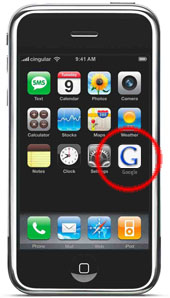 We all know that iPhone will come with preinstalled Google Maps. But what about other Google’s applications and services, such as Picasa, Docs and Spreadsheets, Notebook, GMail, etc?

Speaking at the event in Paris, Google’s CEO Eric Schmidt said: “iPhone is a powerful new device and is going to be particularly good for the apps that Google is building. You should expect other announcements from the two companies over time.” A single sentence was good enough for people to start speculating…

It’s not hard to imagine Google and Apple extending its partnership to bring an array of Google apps to the iPhone. After all Schmidt already sits on the Apple’s board, hence pitching that idea to Jobs&Co doesn’t sound like a problem. What does sound like a problem is the fact that Google Gears at the moment only works on Firefox, and as we know, iPhone comes with Safari. Still, this seems quite solvable… What do you think?

iPhone line has started; Not a promising start?

Ladies and gentlemen, four days are left and the line for the iPhone has started! According to Gizmodo the first...