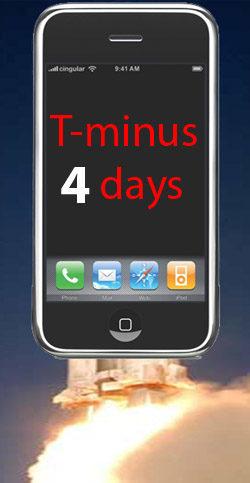 Here’s what I am doing to prepare for the Apple iPhone launch:

Keep my current Windows Mobile device. I paid a lot of money for my HTC P4350 (Herald) – the unlocked version of the T-mobile Wing – and I’ll be damned if I don’t get every cent’s worth of use out of this thing. I just cancelled (more on that in a second) my T-mobile contract and have switched over to a T-mobile Pre-Paid SIM card. But, I don’t see any point in having a Windows Mobile smartphone and an Apple iPhone at the same time. So, as soon as I get my hands on the iPhone, I will be selling my (mint condition) HTC P4350 on either CraigsList or eBay

. I also have the option of using one of the many online cell phone buyers. (CellPhoneSwap.com)

I canceled my T-mobile contract on grounds that they increased the text messaging fee – which constituted a breach of the contract that I signed with them. It was something of an ordeal to get them to free me from their binds, but they did it. More on that here. You can also sell your contract through services like CellSwapper and Resellular. The Consumerist has a funny list of other ways to get out of your wireless sentence contract. We like the last two options for getting out of that contract – joining the armed forces, or dying.

As far as the Apple iPhone launch date. I’m going to go to my nearest AT&T/Cingular store to get myself on one of those not-quite-non-existent (did you follow that?) pre-order lists.

Working overtime to save the extra dough for that Apple Bluetooth headset that just earned FCC approval.

Finally, I’m going to get in shape – running, lifting weights, general physical improvement – so that I can be in tip-top condition for all that line-waiting and pushing/shoving that accompanies hot product launches.

What are you guys gonna do? Anyone want to buy a mint condition HTC P4350 (Herald)? 😉 Just joking…kind of.

Just as we expected, the "iPlans" have been announced today! Although we were expected to have a few more included...