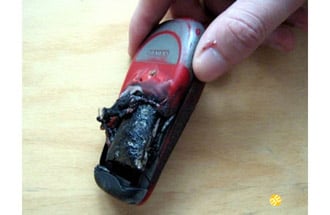 That’s right, an exploding cell phone has been blamed for the death of Chinese welder Xiao Jinpeng, working at Yingpan Iron Ore Dressing Plant in Gansu’s Jinta county. In what we suspect is the first case of an exploding gadget actually killing a man, the battery in Xiao’s Motorola cell phone exploded while in his shirt pocket. The explosion was linked to high-temperatures in the plant, according to colleagues – that must have been some crazy-hot work environment.

The fatal battery failure took place on June 19 and resulted in Xiao’s death on July 4th. The battery explosion broke the welder’s ribs and fragments of the casing pierced his heart. Authorities are investigating the incident – particularly whether or not the man was using an authentic Motorola phone and genuine Motorola battery (we all know how prolific Chinese knock-offs can be). If the device turns out to be a bona fide Motorola product, the embattled mobile phone manufacturer could be in for some fun times. Motorola Beijing is brushing off any responsibility and even suggesting that Xiao was using a Motorola fake. Way to lay down the damage control, Motorola. Denial and non-responsibility always works best, just as the White House.

[Via: NewLaunches] photo does not depict a Motorola phone.

A recent patent filing by Apple gives us a possible glimpse into Apple's future tech for their Mac computer lineup....