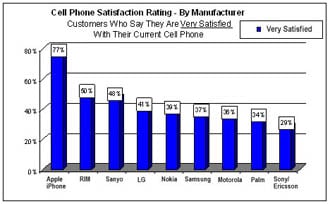 We all know the iPhone is doing well. Almost everyone we talk to is incredibly pleased with their newly acquired gadget (we have heard complaints, but the pros seems to greatly outweigh the cons). So, it’s not really surprising to hear that the iPhone is changing the wireless game in the US. ChangeWave conducted a survey of 3,003 ChangeWave Alliance members to gauge just how well the iPhone was doing. The results are encouraging, if a little expected.

The iPhone is popping up on the market-share-meter with a full 1% of the wireless market. But, and this is where it gets really interesting, when the respondents were asked about their mobile phone purchases in the coming six months, 16% said they’d plunk down the necessary coin for an iPhone. That’s 16% of the wireless market – “catapulting Apple ahead of all other manufacturers.” In comparison, planned purchases of Motorola handsets declined to 14% (from 33% in October 2006). Future planned BlackBerry purchases were up to 13% (from 10%).

And, corroborating “street reports” of iPhone satisfaction, ChangeWave found that an astounding 77% of iPhone owners were “Very Satisfied.” Research In Motion’s BlackBerry garnered a “Very Satisfied” rating from 50% of owners. However, Motorola (36%), Palm (34%), and SonyEricsson (29%) owners didn’t hold their handsets in as high regard. 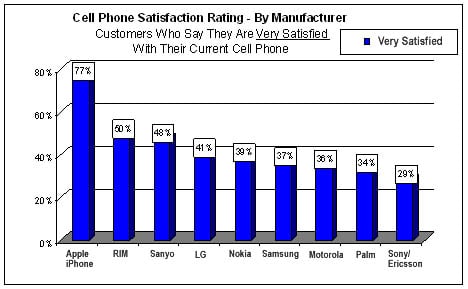 “There’s no doubt about it, consumers are embracing the iPhone. And judging by the numbers, they will continue embracing it,” said Tobin Smith, founder of ChangeWave Research and editor of ChangeWave Investing, in the press release. “The ascendance of the iPhone is going to be a game-changer for both cell phone manufacturers and cellular service providers.”

Another Nokia device found, will the 5610 be announced on August 29th?