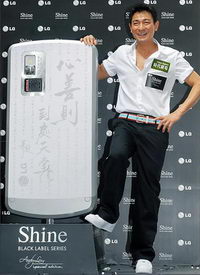 LG Electronics has launched the new special edition version of its Shine phone designed in the partnership with famous Chinese actor Andy Lau. The Shine x Andy Lau Special Edition phone comes complete with the actor’s own handwriting inscribed motto on the back of the phone which says “Heaven is where the kind hearted people are.”

Those not familiar — myself included — should know that Andy Lau Tak-Wah is the 46 year old movie actor and producer, who has appeared in more than 100 films. Obviously, LG is aiming to appeal to the Andy Lau’s huge fan base throughout Asia, although I find Shine appealing even without his calligraphy.