We know they’re coming – we just don’t know when. Yes, I’m talking about the mobile projectors which should revolutionize the way we use our mobile phones by overcoming one of the main obstacles of the modern handsets – small screen. 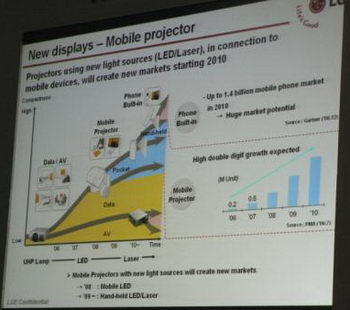 Speaking at the 7th International Meeting on Information Display (IMID 2007), LG’s President and CTO Hee-Gook Lee stated that LED and laser-based mobile projectors will be integrated into mobile phones by 2010, and will become established quickly.

Personally, after we saw few companies demoing their mobile projectors, I was looking forward to see the first mobile phones with this technology announced in 2008. Apparently — according to the Korean electronics makers — we’ll have to wait bit longer to see this happening…

You may not know InterDigital's products as they are more known for their patent portfolio. Hack, they've even clashed with...