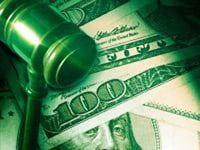 Ahh, NTP – those crazy patent-infringement-lawsuit experts are at it again. Apparently, they weren’t satisfied with their $618 million settlement from RIM, and now they’re jumping on the patent-infringement bandwagon that seems to be rolling through the US these days.

NTP alleges that AT&T, Sprint, Verizon, and T-Mobile are infringing on eight patents that NTP holds on mobile email technology. The patent-holding firm is also calling out the Sidekick for specifically treading on NTP mobile email patents.

NTP is seeking royalties on all smartphones and PDAs and other email devices from the four national wireless carriers.

Yea, good luck NTP, but not too much luck – just enough to spend part of your RIM-settlement windfall on court fees, and learn a lesson.

[Via: The Globe and Mail]