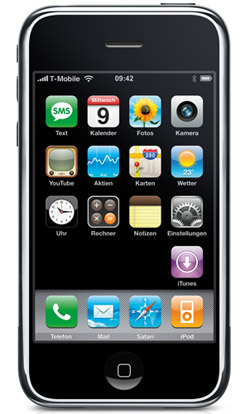 Following on yesterday’s official announcement that the UK iPhone will be the responsibility of UK wireless carrier O2, Apple today announced that the German iPhone carrier will indeed be Deutsch Telekom’s T-Mobile – as we expected. Germany and the UK will see Apple dopping the iPhone simultaneously on November 9.

T-Mobile Germany reportedly agreed to pony up 30% of iPhone revenue to Apple as part of a kickback deal. A bit shy of O2’s reported 40% revenue sharing agreement with Apple, but an incredible deal nonetheless.

German’s can expect to pay €399 (including V.A.T and 2-year T-Mobile tariff) for an iPhone come this November 9 – from Deutsche Telekom’s retail locations and T-Mobile’s online store.

We’re all a little relieved to hear that the previously “leak” that had T-Mobile Germany getting a 3G iPhone with 16GB was an apparent fake. Germans will be getting the same EDGE-only iPhone that launched in the US. All us early iPhone adopters can breathe a little easier, knowing that our friends across the pond will be dealing with the same EDGE speeds that we love so much.

Since when does Steve Jobs talk about unreleased products? 3G iPhone promisied for next year

Steve Jobs' used to have impressive keynotes. I don't use any Apple products, yet I still downloaded every single talk...